The magnitude and distribution of wind velocity are the key elements in determining wind design forces. Mountainous or highly developed urban areas provide a rough surface, which slows wind velocity near the surface of the earth and causes wind velocity to increase rapidly with height above the earth’s surface. Large, level open areas and bodies of water provide little resistance to the surface wind speed, and wind velocity increases more slowly with height. Wind velocity increases with height in all cases but does not increase appreciably above the critical heights of about 950 ft for open terrain to 1500 ft for rough terrain. This variation of wind speed over height has been modeled as a power law:

where V is the basic wind velocity, or velocity measured at a height zg above ground and Vz is the velocity at height z above ground. The coefficient n varies with the surface roughness.
It generally ranges from 0.33 for open terrain to 0.14 for rough terrain. The wind speeds Vz and V are the fastest-mile wind speeds, which are approximately the fastest average wind speeds maintained over a distance of 1 mile. Basic wind speeds are measured at an elevation zg above the surface of the earth at an open site. Design wind loads are based on a statistical analysis of the maximum fastest-mile wind speed expected within a given recurrence interval, such as 50 years. Statistical maps of wind speeds have been developed and are the basis of present design methods. However, the maps consider only regional variations in wind speed and do not consider tornadoes, tropical storms, or local wind currents. The wind speed data are maintained for open sites and must be corrected for other site conditions. (Wind speeds for elevations higher than the critical elevations mentioned previously are not affected by surface conditions.)
Wind speeds Vw are translated into pressure q by the equation

The drag coefficient CD depends on the shape of the body or structure and is less than 1 if the wind flows around the body. The pressure q is the stagnation pressure qs if CD = 1.0, since the structure effectively stops the forward movement of the wind. Thus, on substitution in Eq. (9.2) of CD = 1.0 and air density at standard atmospheric pressure,

where the wind speed is in miles per hour and pressure, in psf.
The shape and geometry of the building have other effects on the wind pressure and pressure distribution. Large inward pressures develop on the windward walls of enclosed buildings and outward pressures develop on leeward walls, as illustrated in Fig. 9.1a. Buildings with openings on the windward side will allow air to flow into the building, and internal pressures may develop as depicted in Fig. 9.1b. These internal pressures cause loads on the over-all structure and structural frame. More important, these pressures place great demands on the attachment of roofing and external cladding. Openings in a side wall or leeward wall may cause an internal pressure in the building as illustrated in Fig. 9.1c and d. This buildup of internal pressure depends on the size of the openings for all walls and the geometry of the structure. Slopes of roofs may affect the pressure distribution, as illustrated in Fig. 9.1e. Projections and overhangs (Fig. 9.2) may also restrict the airflow and accumulate pressure.
These effects must be considered in design.
The velocity used in the pressure calculation is the velocity of the wind relative to the structure. Thus, vibrations or movements of the structure occasionally may affect the magnitude of the relative velocity and pressure. Structures with vibration characteristics which cause significant changes in the relative velocity and pressure distribution are regarded as sensitive to aerodynamic effects. They may be susceptible to dynamic instability due to vortex shedding and flutter. These may occur where local airflow around the structure causes dynamic amplification of the structural response because of the interaction of the structural response with the airflow. These undesirable conditions require special analysis that takes into account the shape of the body, airflow around the body, dynamic characteristics of the structure, wind speed, and other related factors. As a result, dynamic instability is not included in the simplified methods included in this section.
The fastest-mile wind speed is smaller than the short-duration wind speed due to gusting.
Corrections are made in design calculations for the effect of gusting through use of gust factors, which increase design wind pressure to account for short-duration increases in wind speed. The gust factors are largely affected by the roughness of the surface of the earth.
They decrease with increasing height, reduced surface roughness, and duration of gusting. 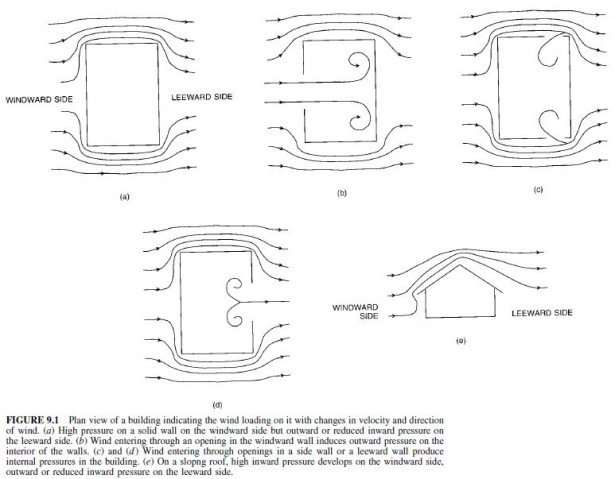 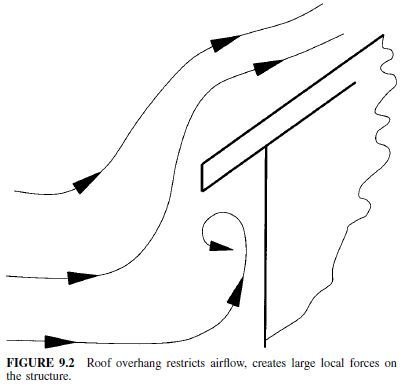 Although gusting provides only a short-duration dynamic loading to the structure, a major concern may be the vibration, rocking, or buffeting caused by the dynamic effect. The pressure distribution caused by these combined effects must be applied to the building as a wind load. 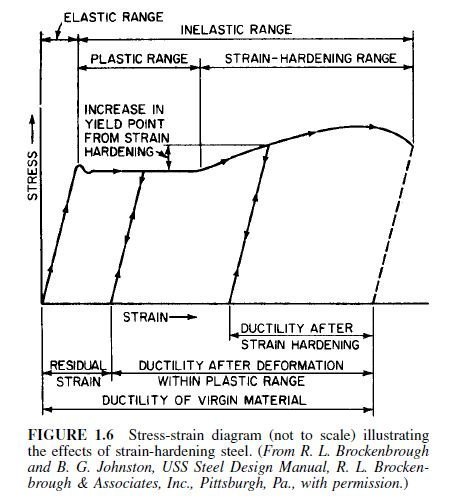