For analysis of a statically determinate or indeterminate structure by any of the displacement methods, independent displacements of the joints, or nodes, are chosen as the unknowns. If the structure is defined in a three-dimensional, orthogonal coordinate system, each of the three translational and three rotational displacement components for a specific node is called a degree of freedom. The displacement associated with each degree of freedom is related to corresponding deformations of members meeting at a node so as to ensure geometric compatibility. 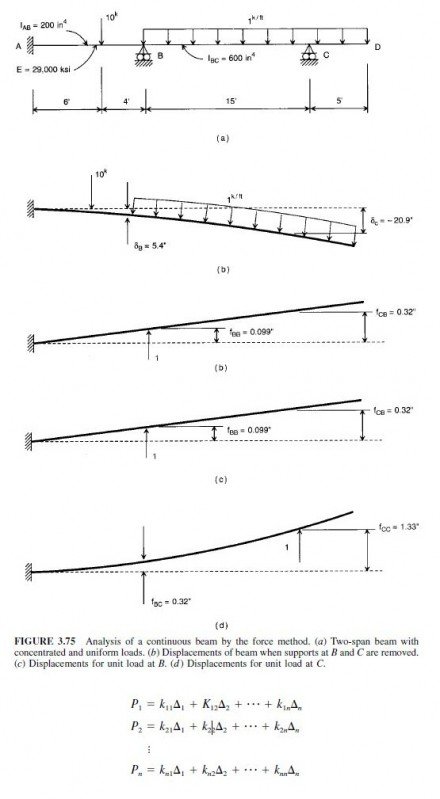 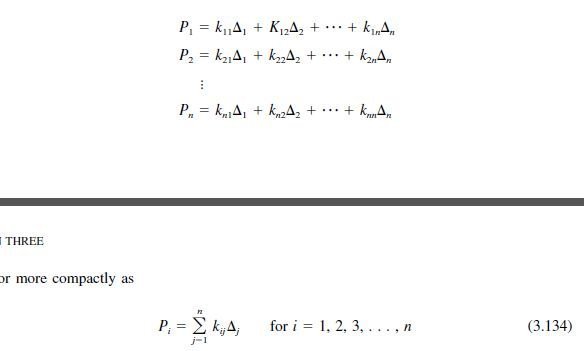 Member loads acting between degrees of freedom are converted to equivalent loads acting
at these degrees of freedom.
The typical kij coefficient in Eq. (3.134) is a stiffness coefficient. It represents the resulting force (or moment) at point i in the direction of load Pi when a unit displacement at point j in the direction of j is imposed and all other degrees of freedom are restrained against
displacement. Pi is the given concentrated load at degree of freedom i in the direction of i. When loads, such as distributed loads, act between nodes, an equivalent force and moment should be determined for these nodes. For example, the nodal forces for one span of a continuous beam are the fixed-end moments and simple-beam reactions, both with signs reversed. Fixed-end moments for several beams under various loads are provided in Fig. 3.76. (See also Arts. 3.37, 3.38, and 3.39.)
(F. Arbabi, Structural Analysis and Behavior, McGraw-Hill, Inc., New York.)