A member subjected to pure compression, such as a column, can fail under axial load in either of two modes. One is characterized by excessive axial deformation and the second by flexural buckling or excessive lateral deformation.
For short, stocky columns, Eq. (3.48) relates the axial load P to the compressive stress ƒ. After the stress exceeds the yield point of the material, the column begins to fail. Its load capacity is limited by the strength of the material.
In long, slender columns, however, failure may take place by buckling. This mode of instability is often sudden and can occur when the axial load in a column reaches a certain critical value. In many cases, the stress in the column may never reach the yield point. The load capacity of slender columns is not limited by the strength of the material but rather by the stiffness of the member.
Elastic buckling is a state of lateral instability that occurs while the material is stressed below the yield point. It is of special importance in structures with slender members.
A formula for the critical buckling load for pin-ended columns was derived by Euler in 1757 and is till in use. For the buckled shape under axial load P for a pin-ended column of constant cross section (Fig. 3.88a), Euler’s column formula can be derived as follows:
With coordinate axes chosen as shown in Fig. 3.88b, moment equilibrium about one end of the column requires 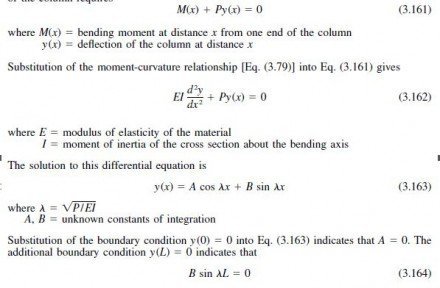 where L is the length of the column. Equation (3.164) is often referred to as a transcendental equation. It indicates that either B = 0, which would be a trivial solution, or that L must equal some multiple of . The latter relationship provides the minimum critical value of P: 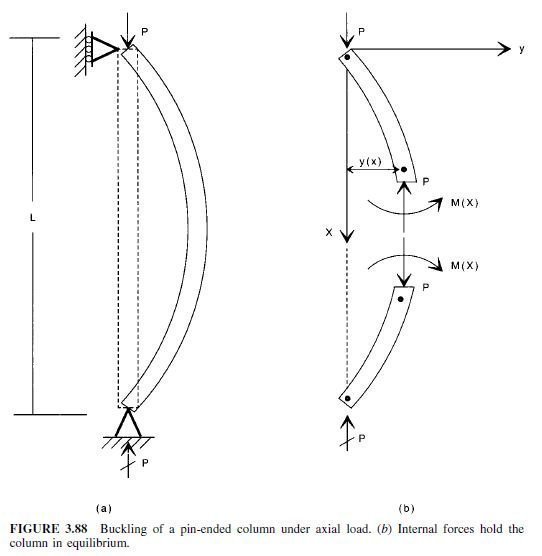 L/ r is called the slenderness ratio of the column.
Euler’s formula applies only for columns that are perfectly straight, have a uniform cross
section made of a linear elastic material, have end supports that are ideal pins, and are
concentrically loaded.
Equations (3.165) and (3.166) may be modified to approximate the critical buckling load of columns that do not have ideal pins at the ends. Table 3.4 illustrates some ideal end conditions for slender columns and corresponding critical buckling loads. It indicates that elastic critical buckling loads may be obtained for all cases by substituting an effective length KL for the length L of the pinned column assumed for the derivation of Eq. (3.166): 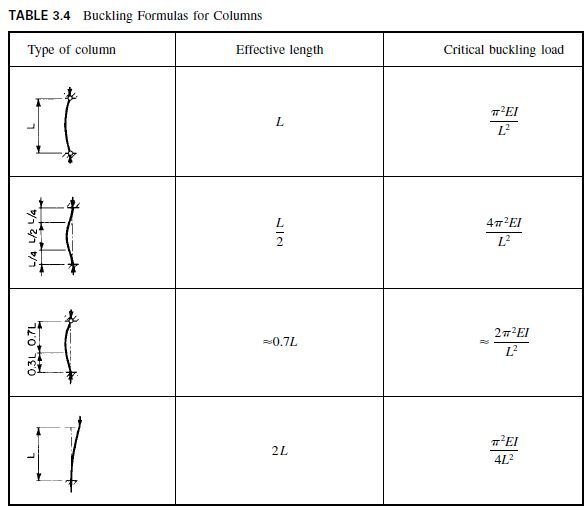 Equation (3.167) also indicates that a column may buckle about either the section’s major or minor axis depending on which has the greater slenderness ratio KL/ r.
In some cases of columns with open sections, such as a cruciform section, the controlling buckling mode may be one of twisting instead of lateral deformation. If the warping rigidity of the section is negligible, torsional buckling in a pin-ended column will occur at an axial load of