The UBC offers two methods for determining and distributing seismic design loads. One is the dynamic method, which is required to be used for a structure that is irregular or of unusual proportions (Art. 9.5). The other specifies equivalent static forces and is the most widely used, because of its relative simplicity.
The equivalent-static-force method defines the static shear at the base of the building as being the smaller of of floor live loads in storage and warehouse occupancies. The base is the level at which seismic motions are imparted to the building.

These equations satisfy the multiple goals of narrowing historic differences between the NEHRP and UBC seismic forces provisions while addressing specific concerns of the regions with greater seismic risk. Equation (9.5a) provides a   base shear for longer period structures, while Eq. (9.5b) establishes the minimum base shear for short period structures.
Ca and CV are seismic coefficients for the acceleration dependent (short period) and velocity dependent (intermediate and long period) structures, respectively. In the NEHRP provisions, these seismic coefficients are determined from a detailed mapping of the United States combined with consideration of the soil conditions at the site. The maps were developed by the
United States Geological Survey based upon a statistical evaluation of expected earthquake accelerations. The UBC includes a much simplified mapping as shown in Fig. 9.6. From this map, a Z coefficient is determined for a given location, and this coefficient can be translated into CV and Ca terms through tables which define the seismic coefficients based upon the seismic zone and the soil conditions at the site. In general, soft soils translate into larger seismic coefficients. In seismic zone 4, CV and Ca also depend upon the seismic source type and the distance from the earthquake fault. The seismic source type is either A, B, or C.
The A designation is given to faults with more rapid slip rates (greater than 5 mm per year) and maximum possible moment magnitudes of 7.0 or greater, and the source type C is given to all faults with possible moment magnitudes less than 6.5 and with slower slip rates (less than 2 mm per year). 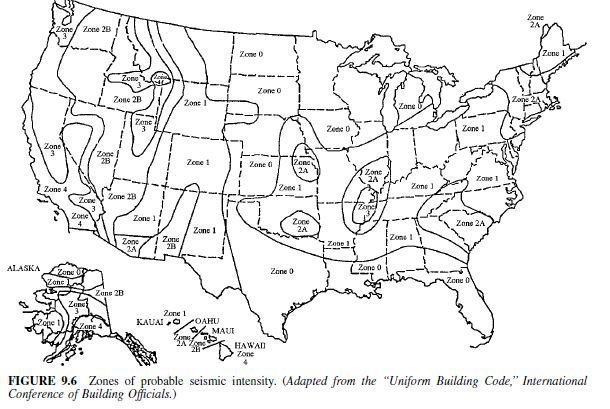 Equation (9.6a) provides a lower bound limit on all seismic forces, and Eq. (9.6b) provides a lower bound seismic base shear which accounts for the increased damage expected with buildings constructed very near the earthquake fault. The NV term varies between 1.0 and 2.0, and it depends upon the seismic source type and the distance from this source. NV is always 1.0 for structures more than 15 km from the source and for source type C. T is the fundamental period of the structure. It may be computed by dynamic analysis or by an approximate equation such as

where hn is the height, ft, from the base of the building to level n, which is the uppermost level in the main portion of the structure. The factor Ct = 0.035 for steel moment-resisting frames, which are relatively flexible structures, Ct = 0.030 for eccentric-braced frames and reinforced concrete moment-resisting frames. Ct = 0.02 for braced frames and other relatively stiff structures.
Equation (9.7) yields periods that are shorter than those computed for some steel structures.
Hence, when T is computed from the structural properties and deformation characteristics of the resisting elements, the UBC requires that the period used in Eq. (9.5a) be not more than 30% larger than computed by Eq. (9.7) for seismic zone 4 and not more than 40% larger than that computed for the other seismic zones. This limitation is particularly important for steel moment-resisting frames because it frequently controls their design.
The seismic design shear V depends on regional seismicity (Fig. 9.6), which is quantified by a zone factor Z, which approximates an effective peak ground acceleration (on firms soil for the region). Z = 0.075 for zone 1 in Fig. 9.6, 0.15 for zone 2, 0.30 for zone 3, and 0.40 for zone 4. Seismic zone 2 is divided into two regions (2A and 2B) which have the same design base shear, but different detailing requirements.

The importance factor I in Eqs. (9.5) and (9.6) depends on the importance of the building.
I = 1.25 for essential or hazardous facilities and 1.0 for standard or special-occupancy structures.
The coefficient R in Eq. (9.5) reduces the seismic design forces in recognition of the ductility achieved by the structural system during a major earthquake. A measure of the ductility and inelastic behavior of the structure, R ranges from 2.2 to 8.5. The largest values of R are used for ductile structural systems that can dissipate large amounts of energy and can sustain large inelastic deformations. The smallest values are intended to assure nearly elastic behavior when the overstrength normally achieved in design is considered. Special steel moment resisting frames have historically been regarded as one of the most ductile structural systems and are assigned R  8.5. Moment resisting steel frames are threedimensional frames, where the members and joints are capable of resisting lateral forces on the structure primarily by flexure. While this structural system is still highly regarded, the performance of special moment frames during the January 17, 1994, Northridge earthquake raised serious questions as to the performance of these structures, and this will be discussed in some detail in Art. 9.6. Ordinary moment frames are designed to lesser ductility criteria, and R = 4.5.
For steel eccentric braced frames (Fig. 9.13), at least one end of each diagonal brace intersects a beam at a point away from the column-girder joint or from an adjacent bracegirder joint. This eccentric intersection forms a link beam, which must be designed to yield in shear or bending to prevent buckling of the brace. This system is also quite ductile, and R = 7.0. Concentrically braced frames (Fig. 9.12) have concentric joints for brace, beam and column and the inelastic seismic behavior is dominated by buckling of the brace. The ductility achieved with buckling systems is limited because brace fracture may occur during the inelastic deformation, and as a result R = 5.6 for these ordinary concentrically braced systems. Fracture of the brace is less likely to occur if the connections of the system are designed to avoid deterioration and fracture during brace buckling. As a result, special concentrically braced frames are designed for these enhanced ductility conditions and R = 6.4.
Finally dual systems, such as special steel moment-resisting frames capable of resisting at least 0.25 V, combined with steel eccentric braced frames, special concentrically braced frames, or ordinary braced frames have improved inelastic performance over the individual systems acting alone, and R = 8.5, 7.5 and 6.5, respectively.

Force Distribution. The seismic base shear V (Eqs. (9.5) and (9.6)) is distributed throughout the structure in accordance with its mass and stiffness. A concentrated force Ft , however, should be applied to the top of the structure if the period T is greater than 0.7 sec.

Ft provides a constant shear over the height of structure. The static-force method is a singlemode design method, even though long-period structures are influenced by higher-mode response, and Ft simulates the effect of higher-mode response on the earthquake-load distribution.
The remainder of the base shear is distributed over the height of the structure in accordance with a first-mode approximation,

where Fi and wi are the seismic force and floor weight at the ith level and xi is the height from the base to the ith floor. The force Fi at each floor is distributed horizontally in proportion to the distribution of the mass of the floor. The stiffness of the floor diaphragm must be evaluated to determine whether the diaphragm satisfies the rigid or flexible diaphragm stiffness requirements. With rigid diaphragms, the horizontal forces are distributed to vertical frames with consideration of the horizontal mass distribution (including minimum torsion) and the relative stiffness of the frames. With flexible diaphragms, the horizontal forces are distributed to vertical frames with consideration of the mass distribution and the tributary area of each frame. Floor slabs and their attachments between floor diaphragms and lateral load frames must have adequate strength to distribute these inertial forces. The frames must be designed for a minimum torsion, which is produced by a mass eccentricity of 5% of the normal maximum base dimension. This minimum is in addition to torsion due to the computed eccentricity between the center of mass and gravity.
Deflections and Element Design Forces. The UBC permits both the Allowable Stress and Strength Design methods. The strength design methods use load factors which are derived based upon a statistical evaluation of the probability of the various load occurrences and are quite similar to those used in the AISC LRFD provisions. Allowable Stress Design uses the seismic design loads as service loads. A separate set of Allowable Stress load factors are used to translate the seismic design forces to service load forces which can be used with allowable stresses and stress increases where appropriate. The horizontal earthquake loads are applied to the structure as described earlier. They are applied separately in all horizontal
directions, but they are combined with vertical acceleration effects in element evaluations.
This is done as follows:

E is the earthquake load for a given element, Eh and Ev are the loads due to given horizontal and vertical components of earthquake shaking, and  is a reliability and redundancy factor which is defined by Eq. (9.10b). The term rmax is defined for each floor level by the ratio of the maximum story shear carried by a single element compared to the total story shear. This definition varies somewhat for different structural systems. AB is the ground floor area of the structure. This redundancy factor tends to increase the design forces for elements in structures with little redundancy in the lateral load system.
Element forces and structural deflections are determined by computer analysis or they may be estimated by approximate analysis methods described later in this section. The story drift and critical deflections of the structure can be estimated by a nonlinear analysis including P   effects. Most structural engineers are unprepared to do a nonlinear analysis, and so an alternate method is provided. With this alternate method, a linear elastic analysis is performed with the factored loads applied. The maximum story drifts and deflections, S, from this elastic analysis are then corrected by the equation to   for inelastic behavior and to estimate the maximum inelastic response, M. P   effects are intended to be included in this estimated deflection. The maximum inelastic story drift, M, must not exceed 0.025 times the story height for structures with periods less than 0.7 sec. and 0.020 times story height for structures with longer periods.