Early cable-suspended bridges were footbridges consisting of cables formed from twisted vines or hide drawn tightly to reduce sag. The cable ends were attached to trees or other permanent objects located on the banks of rivers or at the edges of gorges or other natural obstructions to travel. The deck, probably of rough-hewn plank, was laid directly on the cable. This type of construction was used in remote ages in China, Japan, India, and Tibet.
It was used by the Aztecs of Mexico, the Incas of Peru, and by natives in other parts of South America. It can still be found in remote areas of the world.
From the sixteenth to nineteenth centuries, military engineers made effective use of rope suspension bridges. In 1734, the Saxon army built an iron-chain bridge over the Oder River at Glorywitz, reportedly the first use in Europe of a bridge with a metal suspension system.
However, iron chains were used much earlier in China. The first metal suspension bridge in North America was the Jacob’s Creek Bridge in Pennsylvania, designed and erected by James Finley in 1801. Supported by two suspended chains of wrought-iron links, its 70-ft span was stiffened by substantial trussed railing and timber planks.
Chains and flat wrought-iron bars dominated suspension-bridge construction for some time after that. Construction of this type was used by Thomas Telford in 1826 for the noted Menai Straits Bridge, with a main span of 580 ft. But 10 years before, in 1816, the first wire suspension bridges were built, one at Galashiels, Scotland, and a second over the Schuylkill River in Philadelphia.
A major milestone in progress with wire cable was passed with erection of the 1,010-ft suspended span of the Ohio River Bridge at Wheeling, Va. (later W.Va.), by Charles Ellet, Jr., in 1849. A second important milestone was the opening in 1883 of the 1,595.5-ft wirecable- supported span of the Brooklyn Bridge, built by the Roeblings.

In 1607, a Venetian engineer named Faustus Verantius published a description of a suspended bridge partly supported with several diagonal chain stays (Fig. 15.1a). The stays in that case were used in combination with a main supporting suspension (catenary) cable. The first use of a pure stayed bridge is credited to Lo¨scher, who built a timber-stayed bridge in 1784 with a span of 105 ft (Fig. 15.2a). The pure-stayed-bridge concept was apparently not used again until 1817 when two British engineers, Redpath and Brown, constructed the King’s Meadow Footbridge (Fig. 15.1b) with a span of about 110 ft. This structure utilized sloping wire cable stays attached to cast-iron towers. In 1821, the French architect, Poyet, suggested a pure cable-stayed bridge (Fig. 15.2b) using bar stays suspended from high towers.
The pure cable-stayed bridge might have become a conventional form of bridge construction had it not been for an unfortunate series of circumstances. In 1818, a composite suspension and stayed pedestrian bridge crossing the Tweed River near Dryburgh-Abbey, England (Fig. 15.1c) collapsed as a result of wind action. In 1824, a cable-stayed bridge crossing the Saale River near Nienburg, Germany (Fig. 15.1d) collapsed, presumably from overloading.
The famous French engineer C. L. M. H. Navier published in 1823 a prestigious work wherein his adverse comments on the failures of several cable-stayed bridges virtually condemned the use of cable stays to obscurity.
Despite Navier’s adverse criticism of stayed bridges, a few more were built shortly after the fatal collapses of the bridges in England and Germany, for example, the Gischlard- Arnodin cable bridge (Fig. 15.2c) with multiple sloping cables hung from two masonry towers. In 1840, Hatley, an Englishman, used chain stays in a parallel configuration resembling harp strings (Fig. 15.2d). He maintained the parallel spacing of the main stays by using a closely spaced subsystem anchored to the deck and perpendicular to the principal loadcarrying cables.
The principle of using stays to support a bridge superstructure did not die completely in the minds of engineers. John Roebling incorporated the concept in his suspension bridges, such as his Niagara Falls Bridge (Fig. 15.3); the Old St. Clair Bridge in Pittsburgh (Fig. 15.4); the Cincinnati Bridge across the Ohio River, and the Brooklyn Bridge in New York.
The stays were used in addition to vertical suspenders to support the bridge superstructure.
Observations of performance indicated that the stays and suspenders were not efficient partners.
Consequently, although the stays were comforting safety measures in the early bridges, in the later development of conventional catenary suspension bridges the stays were omitted.
The conventional suspension bridge was dominant until the latter half of the twentieth century.
The virtual banishment of stayed bridges during the nineteenth and early twentieth centuries can be attributed to the lack of sound theoretical analyses for determination of the internal forces of the total system. The failure to understand the behavior of the stayed system and the lack of methods for controlling the equilibrium and compatibility of the various highly indeterminate structural components appear to have been the major drawback to further development of the concept. Furthermore, the materials of the period were not suitable for stayed bridges.
Rebirth of stayed bridges appears to have begun in 1938 with the work of the German engineer Franz Dischinger. While designing a suspension bridge to cross the Elbe River near Hamburg (Fig. 15.5), Dischinger determined that the vertical deflection of the bridge under railroad loading could be reduced considerably by incorporating cable stays in the suspension system. From these studies and his later design of the Stro¨msund Bridge in Sweden (1955) evolved the modern cable-stayed bridge. However, the biggest impetus for cable-stayed bridges came in Germany after World War II with the design and construction of bridges to replace those that had been destroyed in the conflict.
(W. Podolny, Jr., and J. B. Scalzi, ‘‘Construction and Design of Cable-Stayed Bridges,’’ 2d ed., John Wiley & Sons, Inc., New York; R. Walther et al., ‘‘Cable-Stayed Bridges,’’ Thomas Telford, London; D. P. Billington and A. Nazmy, ‘‘History and Aesthetics of Cable- Stayed Bridges,’’ Journal of Structural Engineering, vol. 117, no. 10, October 1990, American Society of Civil Engineers.) 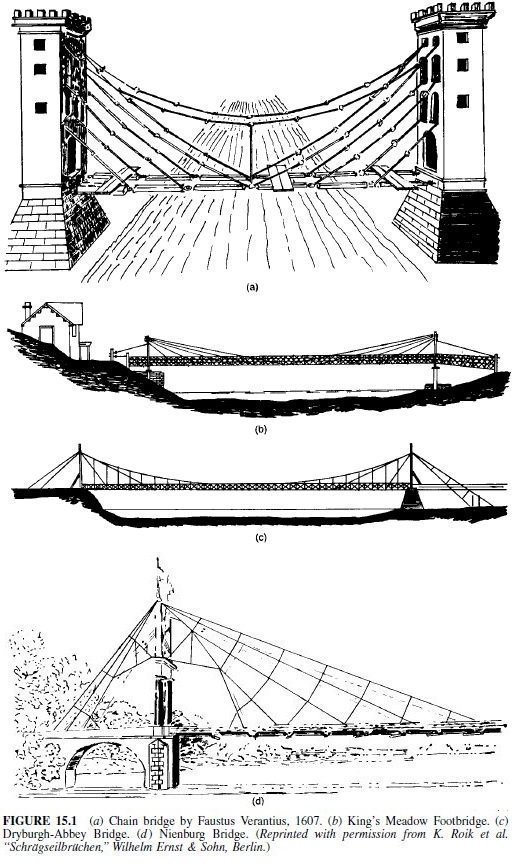 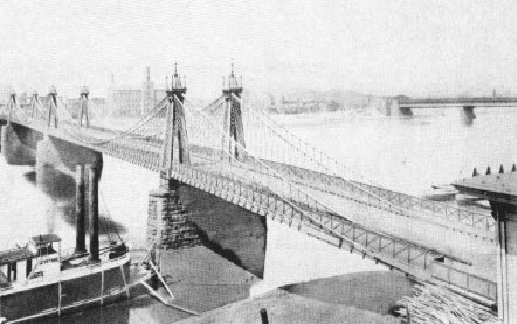