For a given size of fillet weld, cooling rate is faster and restraint is greater with thick plates than with thin plates. To prevent cracking due to resulting internal stresses, specifications set minimum sizes for fillet welds, depending on plate thickness (Table 5.13).
In bridges, seal welds should be continuous. Size should be changed only when required for strength or by changes in plate thickness.
To prevent overstressing of base material at a fillet weld, standard specifications also limit the maximum weld size. They require that allowable stresses in adjacent base material not be exceeded when a fillet weld is stressed to its allowed capacity.
Example. Two angles transfer a load of 120 kips to a 3⁄8-in-thick plate through four welds (Fig. 5.18). Assume that the welding process is shielded metal-arc using E70XX electrodes and steel is ASTM A36. Use AISC ASD method. 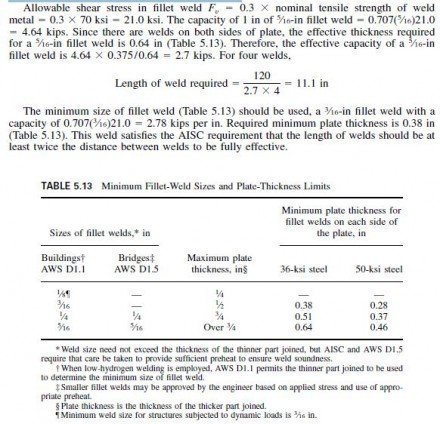 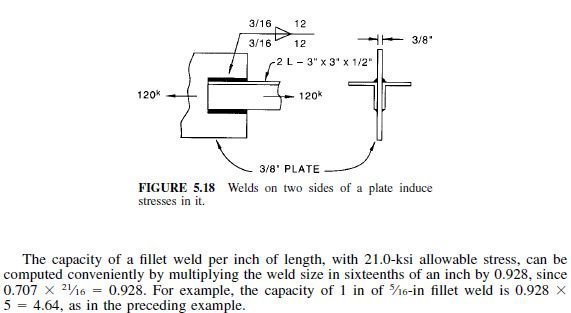  4.64, as in the preceding example.
A limitation also is placed on the maximum size of fillet welds along edges. One reason is that edges of rolled shapes are rounded, and weld thickness consequently is less than the nominal thickness of the part. Another reason is that if weld size and plate thickness are nearly equal, the plate corner may melt into the weld, reducing the length of weld leg and the throat. Hence standard specifications require the following: Along edges of material less than 1⁄4 in thick, maximum size of fillet weld may equal material thickness. But along edges of material 1⁄4 in or more thick, the maximum size should be 1⁄16 in less than the material thickness.
Weld size may exceed this, however, if drawings definitely show that the weld is to be built out to obtain full throat thickness. AWS D1.1 requires that the minimum effective length of a fillet weld be at least four times the nominal size, or else the weld must be considered not to exceed 25% of the effective length. AWS D1.5 requires that the minimum effective length of a fillet weld be at least four times the nominal size or 11⁄2 in, whichever is greater.
Suppose, for example, a 1⁄2-in weld is only 11⁄2 in long. Its effective size is 11⁄2/4  3⁄8 in.
Subject to the preceding requirements, intermittent fillet welds may be used in buildings to transfer calculated stress across a joint or faying surfaces when the strength required is less than that developed by a continuous fillet weld of the smallest permitted size. Intermittent fillet welds also may be used to join components of built-up members in buildings. But such welds are prohibited in bridges, in general, because of the requirements for sealing edges to prevent penetration of moisture and to avoid fatigue failures.
Intermittent welds are advantageous with light members, where excessive welding can result in straightening costs greater than the cost of welding. Intermittent welds often are sufficient and less costly than continuous welds (except girder fillet welds made with automatic welding equipment).
Weld lengths specified on drawings are effective weld lengths. They do not include distances needed for start and stop of welding.
To avoid the adverse effects of starting or stopping a fillet weld at a corner, welds extending to corners should be returned continuously around the corners in the same plane for a distance of at least twice the weld size. This applies to side and top fillet welds connecting brackets, beam seats, and similar connections, on the plane about which bending moments are computed. End returns should be indicated on design and detail drawings.
Fillet welds deposited on opposite sides of a common plane of contact between two parts must be interrupted at a corner common to both welds.
If longitudinal fillet welds are used alone in end connections of flat-bar tension members, the length of each fillet weld should at least equal the perpendicular distance between the welds. The transverse spacing of longitudinal fillet welds in end connections should not exceed 8 in unless the design otherwise prevents excessive transverse bending in the connections.