The design of a truss hanger by the AASHTO LRFD Specifications is presented subsequently.
This is preceded by the following introduction to the LRFD member design provisions.

Tension Members. The net area, An, of a member is the sum of the products of thickness and the smallest net width of each element. The width of each standard bolt hole is taken as the nominal diameter of the bolt plus 0.125 in. The width deducted for oversize and slotted holes, where permitted in AASHTO LRFD Art. 6.13.2.4.1, is taken as 0.125 in greater than the hole size specified in AASHTO LRFD Art. 6.13.2.4.2. The net width is determined for each chain of holes extending across the member along any transverse, diagonal, or zigzag line, as discussed in Art. 13.9.
In designing a tension member, it is conservative and convenient to use the least net width for any chain together with the full tensile force in the member. It is sometimes possible to achieve an acceptable, but slightly less conservative design, by checking each possible chain with a tensile force obtained by subtracting the force removed by each bolt ahead of that chain (bolt closer to midlength of the member), from the full tensile force in the member.
This approach assumes that the full force is transferred equally by all bolts at one end.
Members and splices subjected to axial tension must be investigated for two conditions:
yielding on the gross section (Eq. 13.11), and fracture on the net section (Eq. 13.12). Determination of the net section requires consideration of the following:
• The gross area from which deductions will be made, or reduction factors applied, as appropriate
• Deductions for all holes in the design cross-section
• Correction of the bolt hole deductions for the stagger rule
• Application of a reduction factor U, to account for shear lag
• Application of an 85% maximum area efficiency factor for splice plates and other splicing elements
The factored tensile resistance, Pr, is the lesser of the values given by Eqs. 13.11 and 13.12.

The reduction factor, U, does not apply when checking yielding on the gross section because yielding tends to equalize the non-uniform tensile stresses over the cross section caused by shear lag.
Unless a more refined analysis or physical tests are utilized to determine shear lag effects, the reduction factors specified in the AASHTO LRFD Specifications may be used to account for shear lag in connections as explained in the following.
The reduction factor, U, for sections subjected to a tension load transmitted directly to each of the cross-sectional elements by bolts or welds may be taken as:

For bolted connections, the following three values of U may be used depending on the details of the connection:
For rolled I-shapes with flange widths not less than two-thirds the depth, and structural tees cut from these shapes, provided the connection is to the flanges and has no fewer than three fasteners per line in the direction of stress,
U = 0.90

For all other members having no fewer than three fasteners per line in the direction of stress,
U = 0.85

For all members having only two fasteners per line in the direction of stress,
U = 0.75

Due to strain hardening, a ductile steel loaded in axial tension can resist a force greater than the product of its gross area and its yield strength prior to fracture. However, excessive elongation due to uncontrolled yielding of gross area not only marks the limit of usefulness, it can precipitate failure of the structural system of which it is a part. Depending on the ratio of net area to gross area and the mechanical properties of the steel, the component can fracture by failure of the net area at a load smaller than that required to yield the gross area.
General yielding of the gross area and fracture of the net area both constitute measures of component strength. The relative values of the resistance factors for yielding and fracture reflect the different reliability indices deemed proper for the two modes.
The part of the component occupied by the net area at fastener holes generally has a negligible length relative to the total length of the member. As a result, the strain hardening is quickly reached and, therefore, yielding of the net area at fastener holes does not constitute a strength limit of practical significance, except, perhaps, for some built-up members of unusual proportions.
For welded connections, An is the gross section less any access holes in the connection region.
Compression Members. Bridge members in axial compression are generally proportioned with width/ thickness ratios such that the yield point can be reached before the onset of local buckling. For such members, the nominal compressive resistance, Pn, is taken as:

To avoid premature local buckling, the width-to-thickness ratios of plate elements for compression members must satisfy the following relationship:

Members Under Tension and Flexure. A component subjected to tension and flexure must satisfy the following interaction equations:

Interaction equations in tension and compression members are a design simplification. Such equations involving exponents of 1.0 on the moment ratios are usually conservative. More exact, nonlinear interaction curves are also available and are discussed in the literature. If these interaction equations are used, additional investigation of service limit state stresses is necessary to avoid premature yielding.
A flange or other component subjected to a net compressive stress due to tension and flexure should also be investigated for local buckling.

Members Under Compression and Flexure. For a component subjected to compression and flexure, the axial compressive load, Pu, and the moments, Mux and Muy, are determined for concurrent factored loadings by elastic analytical procedures. The following relationships must be satisfied:

The moments about the axes of symmetry, Mux and Muy, may be determined by either (1) a second order elastic analysis that accounts for the magnification of moment caused by the factored axial load, or (2) the approximate single step adjustment specified in AASHTO LRFD Art. 4.5.3.2.2b.

The following example, prepared in the SI system of units, illustrates the design of a tensile member that also supports a primary live load bending moment. The existence of the bending moment is not common in truss members, but can result from unusual framing. In this example, the bending moment serves to illustrate the application of various provisions of the LRFD Specifications.
A fabricated H-shaped hanger member is subjected to the unfactored design loads listed in Table 13.7. The applicable AASHTO load factors for the Strength-I Limit State and the Fatigue Limit State are listed in Table 13.8. The impact factor, I, is 1.15 for the fatigue limit state and 1.33 for all other limit states.
For the overall bridge cross section, the governing live load condition places three lanes of live load on the structure with a distribution factor, DF, of 2.04 and a multiple presence factor, MPF, of 0.85. For the fatigue limit state, the placement of the single fatigue truck produces a distribution factor of 0.743. The multiple presence factor is not applied to the fatigue limit state.
The factored force effect, Q, in the member is calculated for the axial force and the moment in Table 13.7 from the following equation to obtain the factored member load and moment: 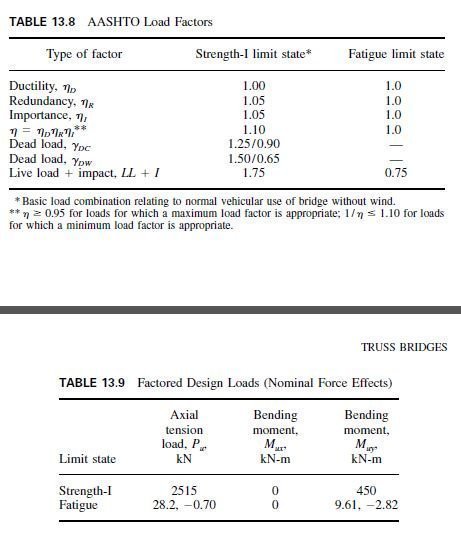 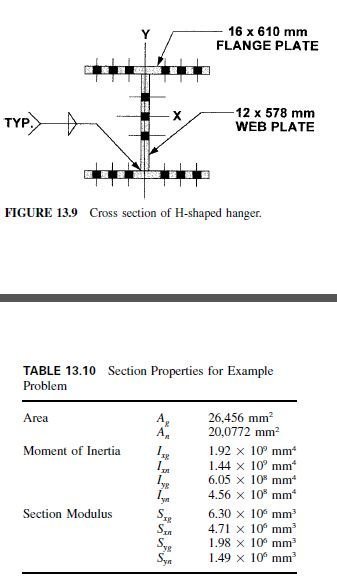 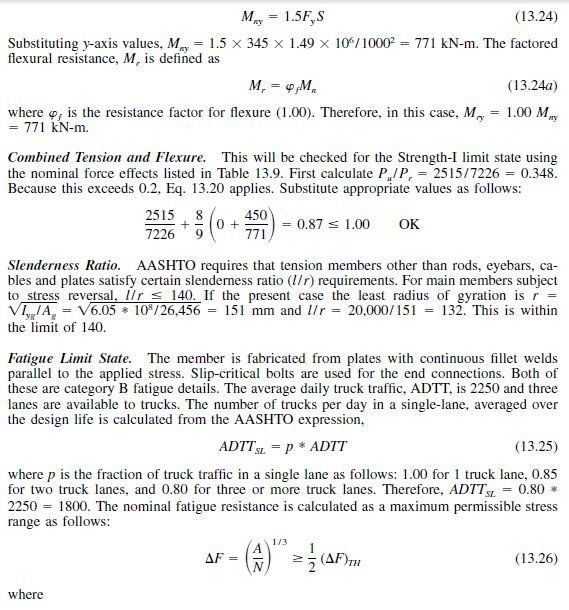 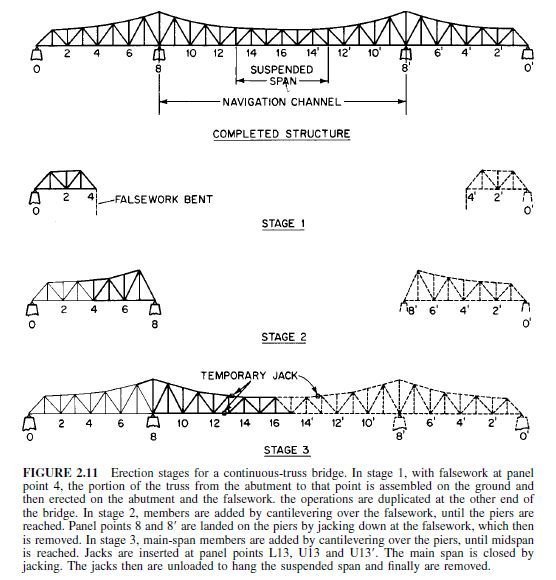 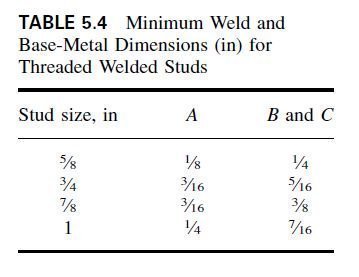