In orthotropic-deck construction, the deck is a steel plate overlaid with a wearing surface and stiffened and supported by a rectangular grid. The steel deck assists its supports in carrying bending stresses. Main components usually are the steel deck plate, longitudinal girders, transverse floorbeams, and longitudinal ribs. Ribs may be open-type (Fig. 11.12a) or closed (Fig. 11.12b).
The steel deck acts as the top flange of the girders (system I, Fig. 11.12c). Also, the steel deck serves as the top flange of the ribs (Fig. 11.12e) and floorbeams (system II, Fig. 11.12d).
In addition, the deck serves as an independent structural member that transmits loads to the ribs (system III, Fig. 11.12e).
Load Distribution. In determining direct effects of wheel loads on the deck plate, in design of system III for H20 or HS20 loadings, single-axle loads of 24 kips, or double-axle loads of 16 kips each spaced 4 ft apart, should be used. The contact area of one 12- or 8-kip 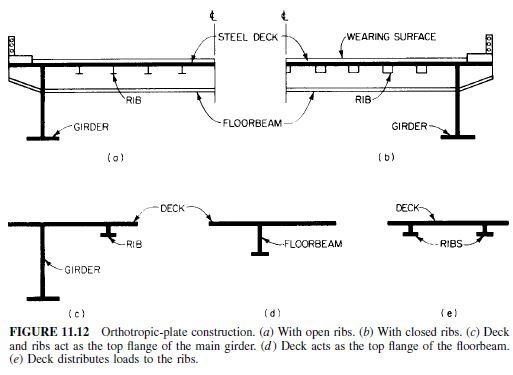 wheel may be taken as 20 in wide (perpendicular to traffic) and 8 in long at the roadway surface. The loaded area of the deck may be taken larger by the thickness of the wearing surface on all sides, by assuming a 45 distribution of load through the pavement.
Deck Thickness. Usually, the deck plate is made of low-alloy steel with a yield point of 50 ksi. Thickness should be at least 3⁄8 in and is determined by allowable deflection under a wheel, unless greater thickness is required by design of system I or II. Deflection due to wheel load plus 30% impact should not exceed 1⁄300 of spacing of deck supports. Deflection computations should not include the stiffness of the wearing surface. When support spacing is 24 in or less, the deck thickness, in, that meets the deflection limitation is

Allowable Stresses (ASD). Stresses in ribs and deck acting as the top flange of the girders and in the ribs due to local bending under wheel loads should be within the basic allowable tensile stress. But when the girder-flange stresses and local bending stresses are combined, they may total up to 125% of the basic allowable tensile stress. Local bending stresses are those in the deck plate due to distribution of wheel loads to ribs and beams. AASHTO standard specifications limit local transverse bending stresses for the wheel load plus 30% impact to a maximum of 30 ksi unless fatigue analysis or tests justify a higher allowable stress. If the spacing of transverse beams is at least 3 times that of the webs of the longitudinal ribs, local longitudinal and transverse bending stresses need not be combined with other bending stresses, as indicated in the following.
Elements of the longitudinal ribs and the portion of the deck plate between rib webs should meet the minimum thickness requirements given in Table 11-25. The stress ƒa may be taken as the compressive bending stress due to bending of the rib, bending of the girder, or 75% of the sum of those stresses, whichever is largest. Unless analysis shows that compressive stresses in the deck induced by bending of the girders will not cause overall buckling of the deck, the slenderness ratio L/r of any rib should not exceed

The effective width, and hence the effective area, of the deck plate acting as the top flange of a longitudinal rib or a transverse beam should be determined by analysis of the orthotropicplate system. Approximate methods may be used.
For the girders, the full width of the deck plate may be considered effective as the top flange if the girder span is at least 5 times the maximum girder spacing and 10 times the maximum distance from the web to the nearest edge of the deck. (For continuous beams, the span should be taken as the distance between inflection points.) If these conditions are not met, the effective width should be determined by analysis.
The elements of the girders and beams should meet requirements for minimum thickness given in Table 11.25 and for stiffeners (Art. 11.12.4).

When connections between ribs and webs of beams, or holes in beam webs for passage of the ribs, or rib splices occur in tensile regions, they may affect the fatigue life of the bridge adversely. Consequently, these details should be designed to resist fatigue as described in Art. 11.10. Similarly, connections between the ribs and the deck plate should be designed for fatigue stresses in the webs due to transverse bending induced by wheel loads.
At the supports, some provision, such as diaphragms or cross frames, should be made to transmit lateral forces to the bearings and to prevent transverse rotation and other deformations.
The same method of analysis used to compute stresses in the orthotropic-plate construction should be used to calculate deflections. Maximum deflections of ribs, beams, and girders due to live load plus impact should not be more than 1⁄500 of the span. See also Art. 12.10.