Where longitudinal beams or girders support through bridges, the spans preferably should have two main members. They should be placed sufficiently far apart to prevent overturning by lateral forces.
Spans. For calculation of stresses, span is the distance between center of bearings or other points of support. For computing span-depth ratio for continuous beams, span should be taken as the distance between dead-load points of inflection.
Allowable-Stress Design. Beams and plate girders should be proportioned by the momentof- inertia method; that is, for pure bending, to satisfy the flexure formula:

where I  moment of inertia, in4, of gross section for compressive stress and of net section
for tensile stress
c  distance, in, from neutral axis to outermost surface
M  bending moment at section, in kips
Fb  allowable bending stress, ksi
The neutral axis should be taken along the center of gravity of the gross section. For computing the moment of inertia of the net section, the area of holes for high-strength bolts in excess of 15% of the flange area should be deducted from the gross area.
Span-Depth Ratio. Depth of steel beams or girders for highway bridges should preferably be at least 1⁄25 of the span.
For bracing requirements, see Art. 11.14.
Cover-Plated Rolled Beams. Welds connecting a cover plate to a flange should be continuous and capable of transmitting the horizontal shear at any point. When the unit shear in the web of a rolled beam at a bearing exceeds 75% of the allowable shear for girder webs, bearing stiffeners should be provided to reinforce the web. They should be designed to satisfy the same requirements as bearing stiffeners for girders in Art. 11.12.
The theoretical end of a cover plate is the section at which the stress in the flange without that cover plate equals the allowable stress, exclusive of fatigue considerations.
Terminal distance, or extension of cover plate beyond the theoretical end, is twice the nominal cover-plate width for plates not welded across their ends and 1.5 times the width for plates welded across their ends. Length of a cover plate should be at least twice the beam depth plus 3 ft. Thickness should not exceed twice the flange thickness.
Partial-length welded cover plates should extend beyond the theoretical end at least the terminal distance or a sufficient distance so that the stress range in the flange equals the allowable fatigue stress range for base metal at fillet welds, whichever is greater. Ends of tapered cover plates should be at least 3 in wide. Welds connecting a cover plate to a flange within the terminal distance should be of sufficient size to develop the computed stress in the cover plate at its theoretical end.
Because of their low fatigue strength, cover-plated beams are seldom cost-effective.
Girder Flanges. Width-thickness ratios of compression flanges of plate girders should meet
the requirements given in Art. 11.12. For other girders, see Arts. 11.16, 11.18, and 11.19.
Each flange of a welded plate girder should consist of only one plate. To change size, plates of different thicknesses and widths may be joined end to end with complete-penetration groove welds and appropriate transitions (Art. 5.26).

Plate girders composed of flange angles, web plate, and cover plates attached with bolts or rivets are no longer used. In existing bolted girders, flange angles formed as large a part of the flange area as practicable. Side plates were used only where flange angles more than 7⁄8 in thick would otherwise be required. Except in composite design, the gross area of the compression flange could not be less than the gross area of the tension flange.
When cover plates were needed, at least one cover plate of the top flange extended full length of the girder unless the flange was covered with concrete. If more than one cover plate was desirable, the plates on each flange were made about the same thickness. When of unequal thickness, they were arranged so that they decreased in thickness from flange angles outward. No plate could be thicker than the flange angles. Fasteners connecting cover plates and flange were required to be adequate to transmit the horizontal shear at any point.
Cover plates over 14 in wide should have four lines of fasteners.
Partial-length cover plates extended beyond the theoretical end far enough to develop the plate capacity or to reach a section where the stress in the remainder of the flange and cover plates equals the allowable fatigue stress range, whichever distance is greater.
Flange-to-Web Connections. Welds or fasteners for connecting the flange of a plate girder to the web should be adequate to transmit the horizontal shear at any point plus any load applied directly to the flange. AASHTO permits the web to be connected to each flange with a pair of fillet welds.
For flange splices, see Arts. 5.26 and 5.27.
Girder Web and Stiffeners. The web should be proportioned so that the average shear stress over the gross section does not exceed the allowable. In addition, depth-thickness ratio should meet the requirements of Art. 11.14. Also, stiffeners should be provided, where needed, in accordance with those requirements. For web splices, see Arts. 5.26, 5.27, and 5.30.
Camber. Girders should be cambered to compensate for dead-load deflection. Also, on vertical curves, camber preferably should be increased or decreased to keep the flanges parallel to the profile grade line.
See also Art. 11.17. 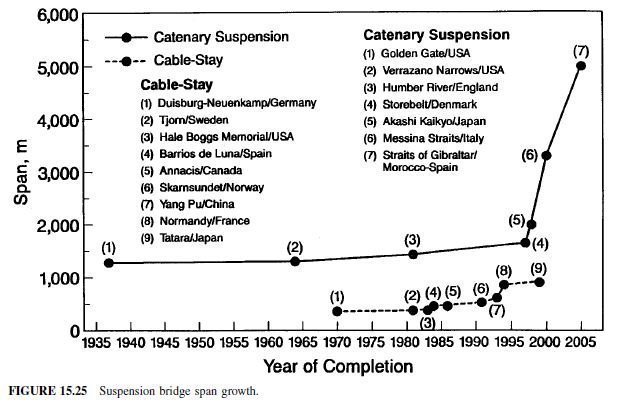