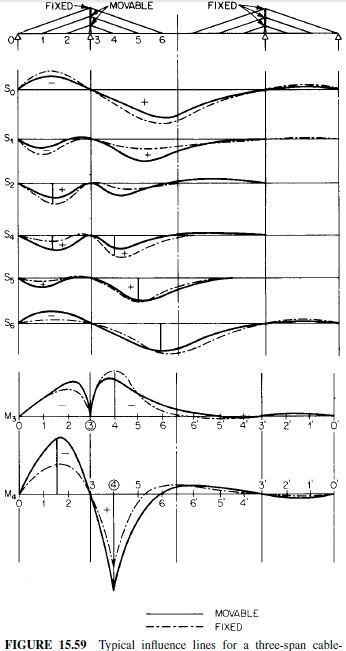 To achieve symmetry of cables at pylons, the ratio of side to main spans should be about 37 where three cables are used on each side of the pylons, and about 25 where two cables are used. A proper balance of side-span length to main-span length must be established if uplift at the abutments is to be avoided. Otherwise, movable (pendulum-type) tiedowns must be provided at the abutments.
Wide box girders are mandatory as stayed girders for single-plane systems, to resist the torsion of eccentric loads. Box girders, even narrow ones, are also desirable for double-plane systems to enable cable connections to be made without eccentricity. Single-web girders, however, if properly braced, may be used.
Since elastic-theory calculations are relatively simple to program for a computer, a formal set may be made for preliminary design after the general structure and components have been sized. 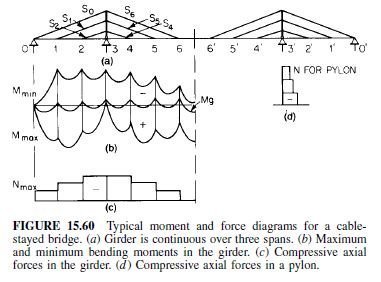 Manual Preliminary Calculations for Cable Stays. Following is a description of a method of manual calculation of reasonable initial values for use as input data for design of a cablestayed bridge by computer. The manual procedure is not precise but does provide first-trial cable-stay areas. With the analogy of a continuous, elastically supported beam, influence lines for stay forces and bending moments in the stayed girder can be readily determined.

From the results, stress variations in the stays and the girder resulting from concentrated loads can be estimated.
If the dead-load cable forces reduce deformations in the girder and pylon at supports to zero, the girder acts as a beam continuous over rigid supports, and the reactions can be computed for the continuous beam. Inasmuch as the reactions at those supports equal the vertical components of the stays, the dead-load forces in the stays can be readily calculated.
If, in a first-trial approximation, live load is applied to the same system, the forces in the stays (Fig. 15.61) under the total load can be computed from 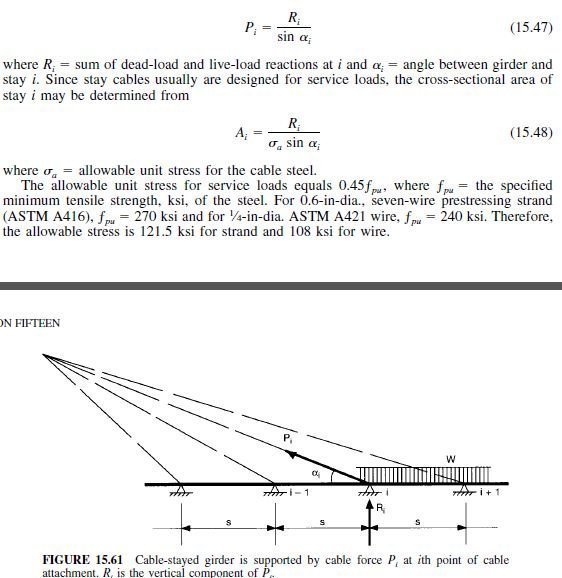 The reactions may be taken as Ri = ws, where w is the uniform load, kips per ft, and s, the distance between stays. At the ends of the girder, however, Ri may have to be determined by other means.
Determination of the force Po acting on the back-stay cable connected to the abutment (Fig. 15.62) requires that the horizontal force Fh at the top of the pylon be computed first.
Maximum force on that cable occurs with dead plus live loads on the center span and dead load only on the side span. If the pylon top is assumed immovable, Fh can be determined from the sum of the forces from all the stays, except the back stay: 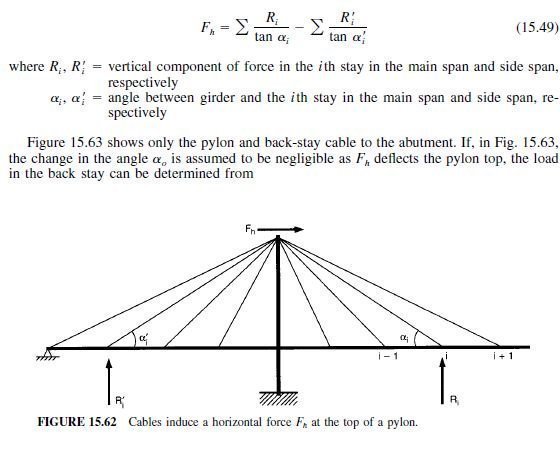 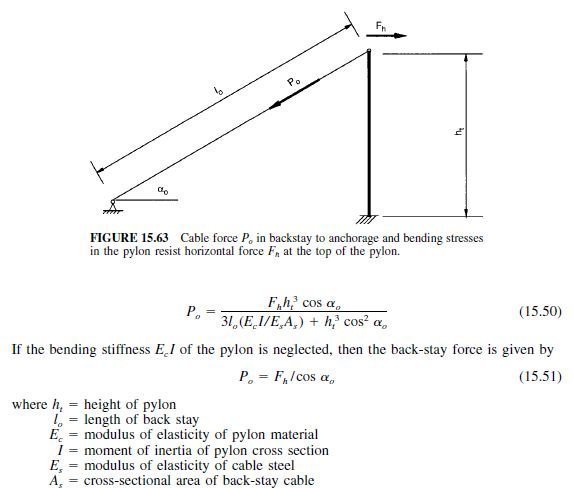 For the structure illustrated in Fig. 15.64, values were computed for a few stays from Eqs. (15.47), (15.48), (15.49), and (15.51) and tabulated in Table 15.11a. Values for the final design, obtained by computer, are tabulated in Table 15.11b.
Inasmuch as cable stays 1, 2, and 3 in Fig. 15.64 are anchored at either side of the anchor pier, they are combined into a single back-stay for purposes of manual calculations. The edge girders of the deck at the anchor pier were deepened in the actual design, but this increase in dead weight was ignored in the manual solution. Further, the simplified manual solution does not take into account other load cases, such as temperature, shrinkage, and creep.
Influence lines for stay forces and girder moments are determined by treating the girder as a continuous, elastically supported beam. From Fig. 15.65, the following relationships are obtained for a unit force at the connection of girder and stay: 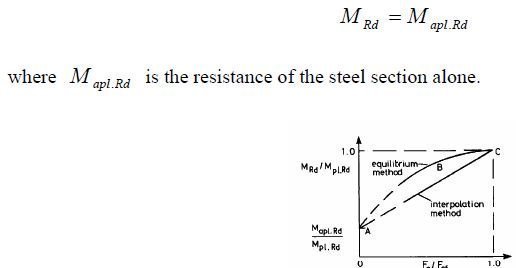 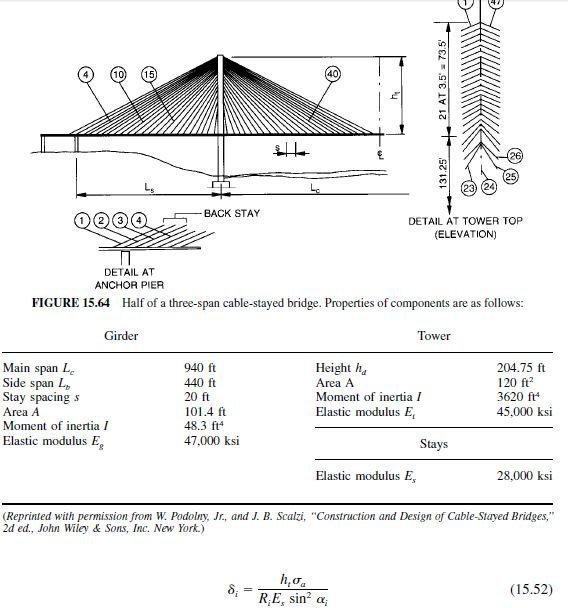 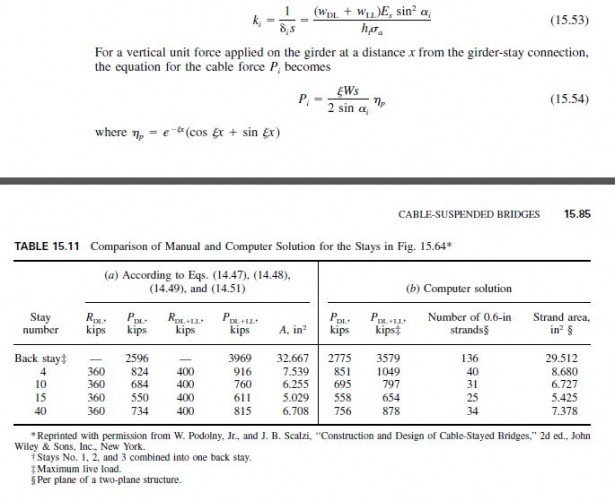 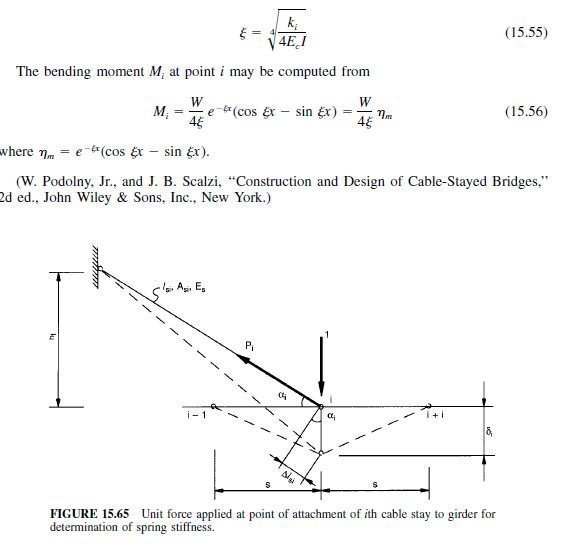 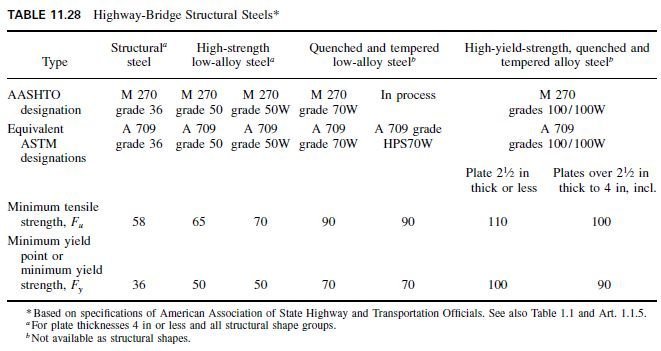 Design of Arch Ribs and Ties