For beams and plate girders, the web area for shear calculations Aw (in2) is the product of the overall depth, d (in) and thickness, t (in) of the web. The AISC LRFD and ASD specifications for structural steel for buildings specify the same nominal equations but present them in different formats. 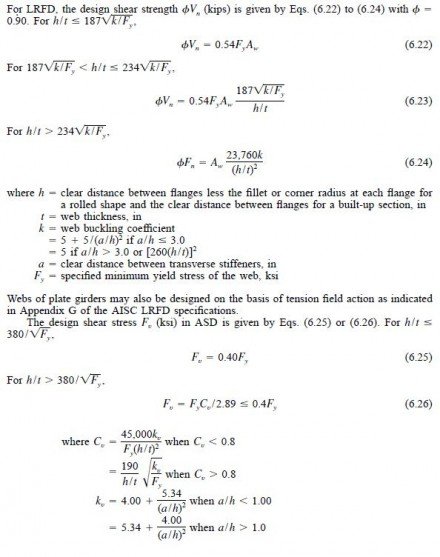 Alternative rules are given for design on the basis of tension field action.

For bolts and threaded parts, design shear strengths are specified in Tables 6.20 and 6.21. The design strengths permitted for high-strength bolts depend on whether a connection is slip-critical or bearing type. Bearing type connections should be used where possible because they are more economical.
Bearing-type joints are connections in which load is resisted by shear in and bearing on the bolts. Design strength is influenced by the presence of threads; i.e., a bolt with threads excluded from the shear plane is assigned a higher design strength than a bolt with threads 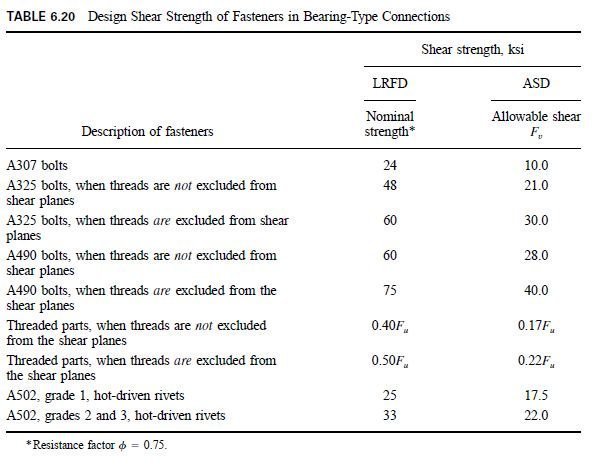 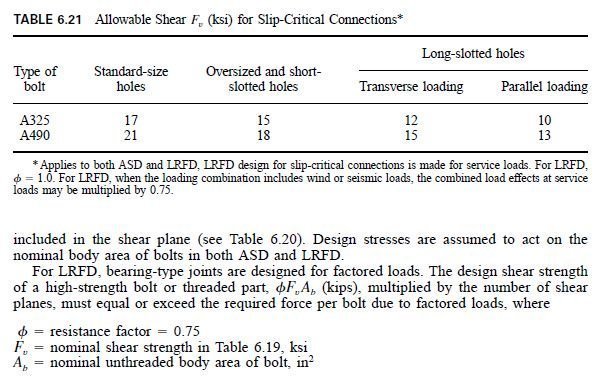 For ASD, bearing-type joints are designed for service loads using the same procedure as above, except that there is no resistance factor so the design shear strength is simply FvAb (kips).
Bolts in both bearing-type and slip critical-joints must also be checked for bearing strength. For LRFD, the check is made for factored loads. The design bearing strength per bolt is @Rn (kips) where @ =  0.75 and Rn is determined as follows. For standard holes, oversized, and short-slotted holes, or for long-slotted holes with the slot parallel to the direction of the bearing force, when deformation at the bolt hole at service load is a design consideration, Rn = 1.2LctFu = direction of force between edge of hole and edge of adjacent hole or edge of material, d (in) is the nominal bolt diameter, t (in) is the thickness of the connected material, and Fu
(ksi) is the tensile strength of the material. The bearing strength differs for other conditions.
For ASD, the check is made for service loads. The allowable bearing load per bolt is 1.2dtFu (kips) for standard holes or short-slotted holes with two or more bolts in the line of force, when deformation at the bolt hole at service load is a design consideration. The allowable bearing load differs for other conditions.
Bearing-type connections are assigned higher design strengths than slip-critical joints and hence are more economical. Also, erection is faster with bearing-type joints because the bolts need not be highly tensioned.
In connections where slip can be tolerated, bolts not subject to tension loads nor loosening or fatigue due to vibration or load fluctuations need only be made snug-tight. This can be accomplished with a few impacts of an impact wrench or by full manual effort with a spud wrench sufficient to bring connected plies into firm contact. Slip-critical joints and connections subject to direct tension should be indicated on construction drawings.
Where permitted by building codes, ASTM A307 bolts or snug-tight high-strength bolts may be used for connections that are not slip critical. The AISC specifications for structural steel for buildings require that fully tensioned, high-strength bolts (Table 6.22) or welds be used for the following joints:
Column splices in multistory framing, if it is more than 200 ft high, or when it is between 100 and 200 ft high and the smaller horizontal dimension of the framing is less than 40% of the height, or when it is less than 100 ft high and the smaller horizontal dimension is less than 25% of the height.
Connections, in framing more than 125 ft high, on which column bracing is dependent and connections of all beams or girders to columns.
Crane supports, as well as roof-truss splices, truss-to-column joints, column splices and bracing, and crane supports, in framing supporting cranes with capacity exceeding 5 tons.
Connections for supports for impact loads, loads causing stress reversal, or running machinery. 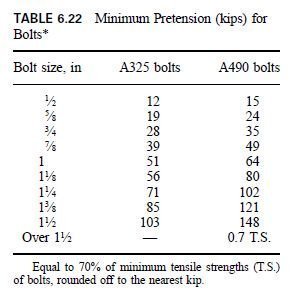 The height of framing should be measured from curb level (or mean level of adjoining land when there is no curb) to the highest point of roof beams for flat roofs or to mean height of gable for roofs with a rise of more than 22⁄3 in 12. Penthouses may be excluded.
Slip-critical joints are connections in which slip would be detrimental to the serviceability of the structure in which the joints are components. These include connections subject to fatigue loading or significant load reversal or in which bolts are installed in oversized holes or share loads with welds at a common faying surface. In slip-critical joints, the fasteners must be high-strength bolts tightened to the specified minimum pretension listed in Table 6.22. The clamping force generated develops the frictional resistance on the slip
planes between the connected piles.
For LRFD, slip-critical bolts can be designed for either factored loads or service loads.
In the first case, the design slip resistance per bolt, @Rstr (kips), for use at factored loads must equal or exceed the required force per bolt due to factored loads, where 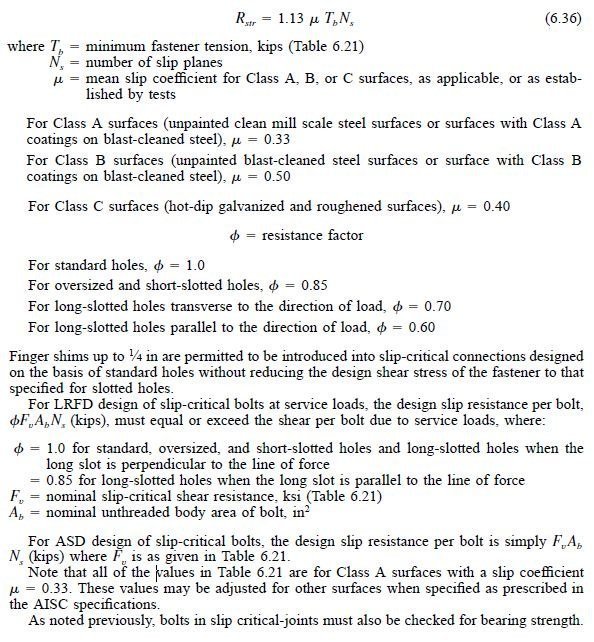 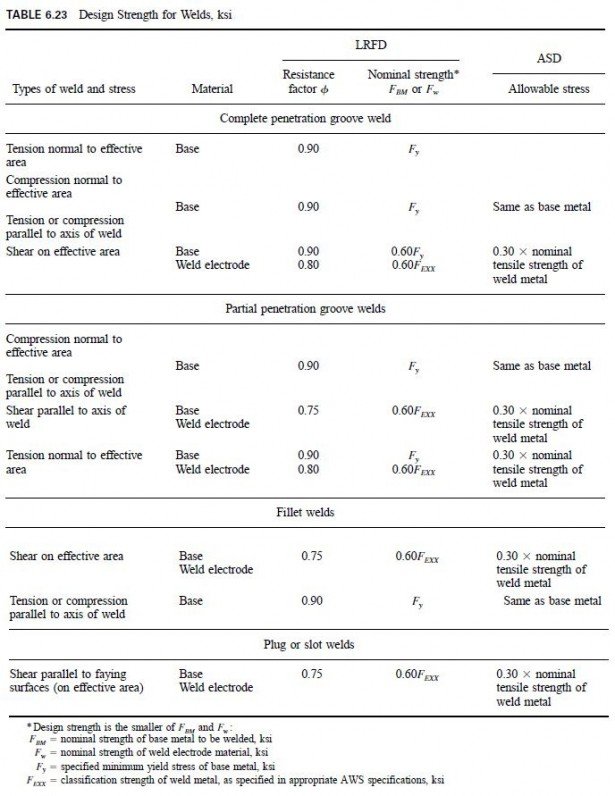