Structural analysis of a suspension bridge is that step in the design process whereby, for given structural geometry, materials, and sizes, the moments and shears in stiffening trusses, axial loads in cables and suspenders, and deflections of all elements are determined for given loads and temperature changes. The stress analysis usually is carried out in two broad categories: static and dynamic.

Before the Manhattan Bridge was designed about 1907, suspension bridges were analyzed by the classical theory of structures, the so-called elastic, or first-order, theory of indeterminate analysis. This neglects the deformations of the structural geometry under load in formulation of the equations of equilibrium. The earliest theory was developed by Rankine, who assumed that a stiffening truss distributes the loads uniformly to the cable from which it is suspended. The elastic theory is advantageous because the resulting equations are linear in the loads and internal forces, and linear superposition applies for internal forces caused by different loads. Distortions of the structural geometry under live load, however, can cause a gross overstatement of moments, shears, and deflections calculated by the elastic theory. 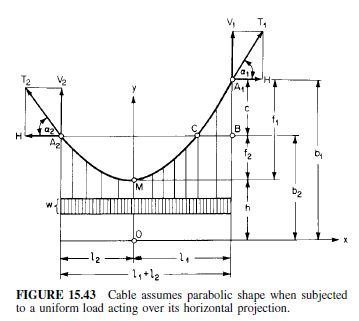 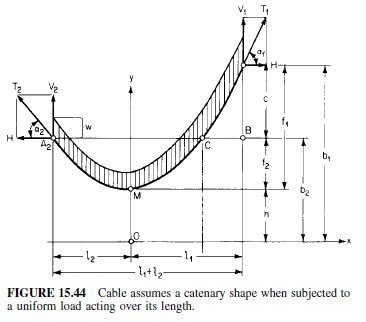 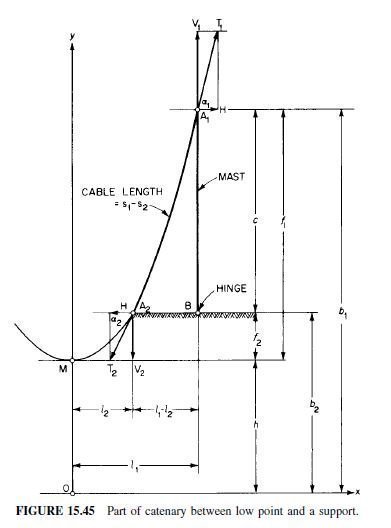 culated by the virtual work or dummy-unit-load method, and the equation can readily be solved for H.
For loads, 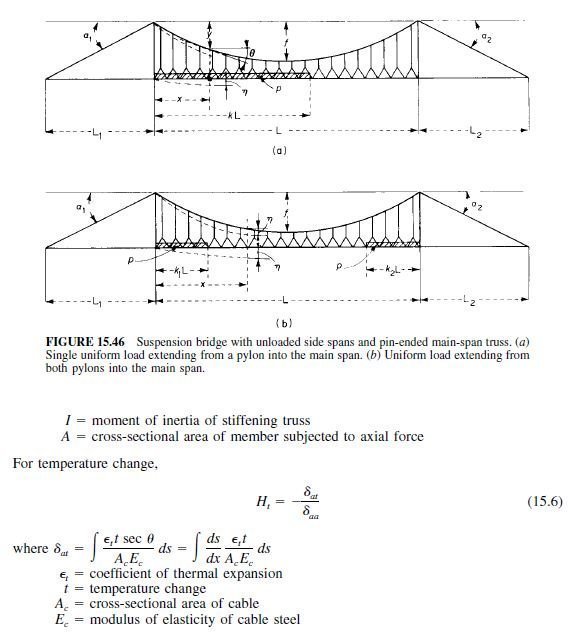 Assumptions. To evaluate Eqs. (15.5) and (15.6), the following conditions are assumed for the structure in Fig. 15.46:
1. The cable takes the shape of a parabola under dead load w.
2. Elongation of suspenders and shortening of pylons are so small that they can be neglected.
3. Spacing of suspenders is so small relative to span that the suspenders can be considered a continuous sheet.
4. The horizontal component of cable tension in side spans equals the horizontal component of cable tension in main span. This holds if the cable is fixed to the top of flexible pylons or to a movable saddle atop the pylons.
5. The stiffening truss acts as a beam of constant moment of inertia simply supported at the ends. Under dead load, it is straight and horizontal. Usually erected so that it carries none of the dead load, the stiffening truss therefore is stressed only by live load and temperature changes.

Thus, the horizontal component of cable tension due to temperature rise t may be computed from 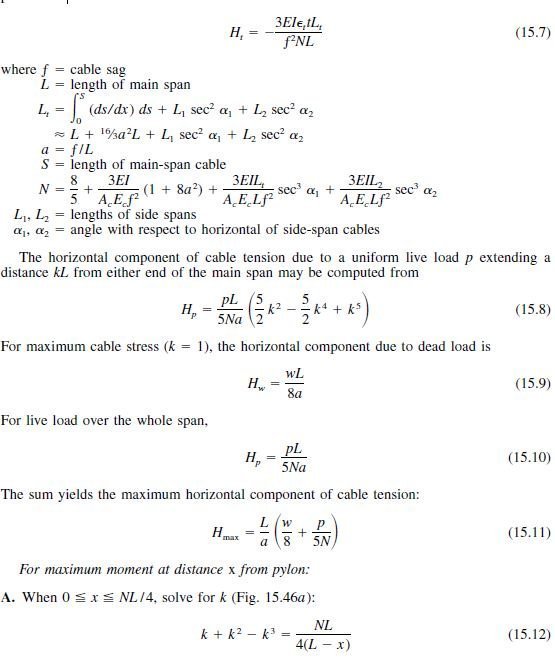 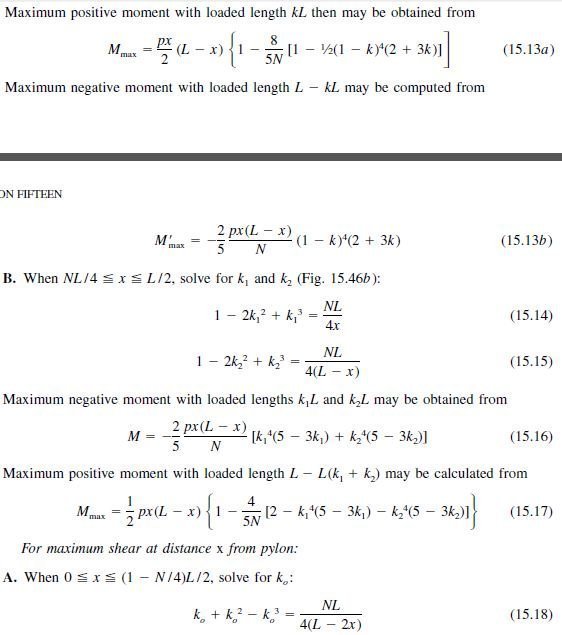 Distortions of structural geometry of long suspension spans under live load may be very large. As a consequence, the elastic theory (Art. 15.16.1) gives unduly conservative moments, shears, and deflections. For economy, therefore, a deflection theory, also referred to as an exact or second-order theory, that accounts for effects of deformations should be used.

With the notation and assumptions given for the elastic theory in Art. 15.16.1, a differential equation can be written for the structure in Fig. 15.46 to include the vertical defection of the cable (and stiffening truss) at any point x. This equation expresses the flexural relationship between the horizontal component of cable tension H under dead and live loads and the stiffening-truss deflection under uniform live load p:

where each prime represents a differentiation with respect to x.
Equation (15.22) by itself is not sufficient for solution for the two unknowns,  and the horizontal component of cable tension Hp due to live load. (Note: H can be expressed in terms of Hp .) Therefore, an additional compatibility equation is necessary. It expresses the cable condition that the total horizontal projection of cable length between anchorages remains unchanged.
The differential equations are not linear, and linear superposition is technically not applicable.
This would imply that the use of influence lines for handling moving live loads is not permissible.
In the conventional deflection theory, however, the differential equations are linearized over a small range by assuming that the exponential terms containing H in the solution of the equations are constant during integration (even though that assumption is not valid for a particular loading case). This assumption may be made because, for example, the loading length for maximum moment at a point is not greatly affected by the magnitude of H. With this quasi-linear theory, an average value of H, or two values, Hmin and Hmax, may be used as a basis for drawing linearized influence lines as in first-order theory. With two influence lines (maximum and minimum) thus available, the results can be interpolated for more accurate values of H.
H. Bleich and S. P. Timoshenko suggested that the zero points of the influence lines be determined in this quasi-linear theory to establish the most unfavorable live-loading position.
Then, the final results may be calculated by the classical theory with the live load in this position.
Besides the preceding classical differential-equation approach, a trigonometric-series  method also is useful. Other advantageous procedures include successive approximation by relaxation theory, simultaneous-linear-equation approach of the flexibility-coefficient methods, elastic-foundation analogy, and analogy of an axially loaded beam.

Much of the literature on classical suspension-bridge theory deals with the effects of minor terms neglected in the assumptions of the deflection theory. S. P. Timoshenko gave an excellent account of the effect of horizontal displacements of the cable, elongation of suspenders, shear deflections, and temperature changes in the cable. (S. P. Timoshenko and D. H. Young, ‘‘Theory of Structures,’’ 2d ed., McGraw-Hill, Inc., New York.) Other investigators have extended the theory to stiffening trusses that are continuous (such as in the Salazar Bridge) or have variable moments of inertia, widely spaced or inclined suspenders, or multiple main spans.
In general, inclined suspenders can have an important effect on results. Continuous spans are of advantage primarily in short bridges, but the advantage diminishes with long spans.
Simple supports are preferred because they avoid settlement problems.
The following treatment of the classical approach is based on A. A. Jakkula’s generalization of the work of many investigators. It is restricted here to the case of a suspension bridge with unloaded backstays and a two-hinged stiffening truss (Figs. 15.46 and 15.47).
This presentation is useful because it has been extended to configurations with loaded backstays, or other variations of the suspension system, and has been programmed for computers.
Advances in computational methods have prompted several new approaches to analysis of suspension-bridges that differ from the classical deflection theory in that they adapt discrete mathematical models to computer programming. For example, if the suspenders are treated as finitely spaced elements (instead of an assumed continuous sheet as in classical methods), the analysis becomes that of an open-panel truss. Solution is required of a set of simultaneous transcendental equations, which are nonlinear because of the effects of distortion.

Such solutions involve iterative techniques, the use of the Newton-Raphson method, and other sophisticated mathematical operations. An analogous continuous formulation adapted to computer use has also been proposed.

The solution of the fundamental differential equation [Eq. (15.22)] can be expressed in terms of hyperbolic functions or exponential functions. In the latter form, the solution is

Constants C1 and C2 are integration constants to be evaluated, for each load position, from the end conditions and conditions of continuity.
Another method for finding the equation of the deflected truss is to represent deflection by a trigonometric series. If the stiffening truss is considered a free body, it will be in equilibrium under the force system indicated in Fig. 15.48. The truss is acted on by dead load w over the entire span, live load p over any length of span k2L - k1L, and suspender pull w + q, where q is the portion of the uniform live load carried by the cable.
The deflection of the truss can be given by the trigonometric series: 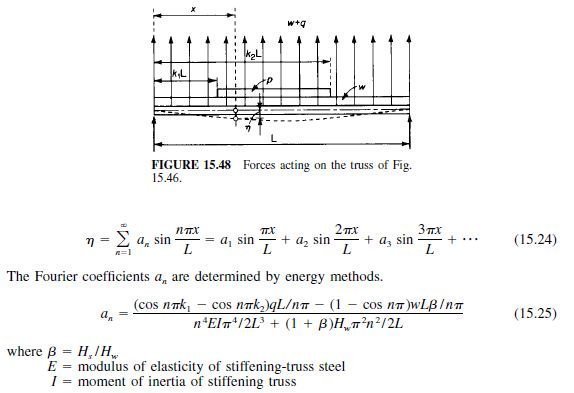 In the following development of the deflection theory, the trigonometric-series solution is used. It converges rapidly and avoids difficulties with the integration constants C1 and C2, which hold only for values of x for which M1 has the same algebraic form. (Thus, the loading in Fig. 15.48 requires evaluation of six constants of integration.)
Equations (15.23) to (15.25) contain the unknown Hs . It must be determined before deflections can be numerically evaluated for any particular case. The energy method may be used for this purpose: the work done by the suspender forces moving through the deflection undergone by the cable is equated to the internal work done by the internal stress in the cable moving through the deformation suffered by the cable.
The force system acting on the cable treated as a free body is shown in Fig. 15.49.
Application of the energy equation yields the so-called cable condition: 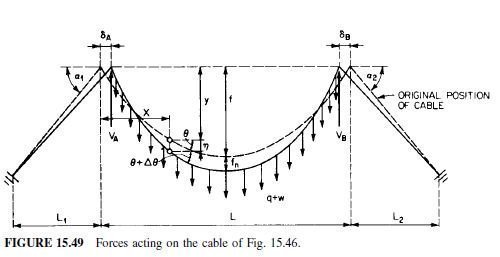 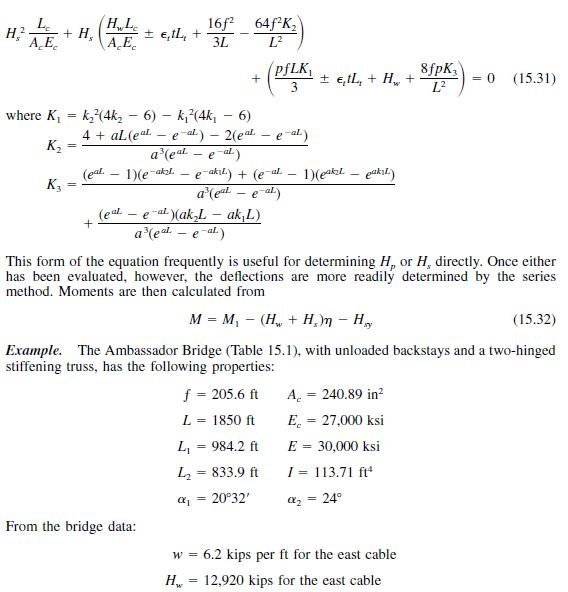 The structure is analyzed for live loads of 0.2 to 2.0 kips per ft in increments of 0.2.
These live loads are placed in various positions: over the entire span, the end half, the center half, the end quarter, the quarter nearest the center, and the center quarter. Analysis is made by both the Timoshenko approximate and exact forms of Eq. (15.27).
Approximate Method. Equation (15.27) becomes, when the proper values of the given data are used: 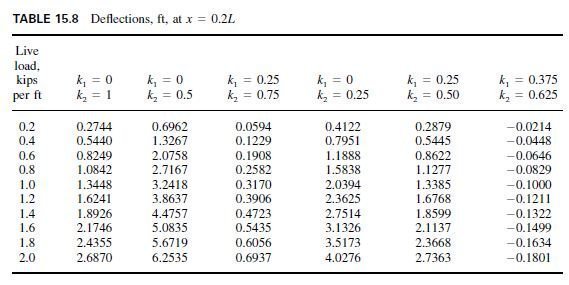 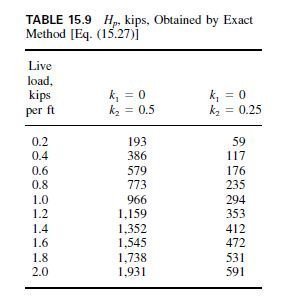