The tensile properties of steel are generally determined from tension tests on small specimens or coupons in accordance with standard ASTM procedures. The behavior of steels in these tests is closely related to the behavior of structural-steel members under static loads. Because, for structural steels, the yield points and moduli of elasticity determined in tension and compression are nearly the same, compression tests are seldom necessary.
Typical tensile stress-strain curves for structural steels are shown in Fig. 1.1. The initial portion of these curves is shown at a magnified scale in Fig. 1.4. Both sets of curves may be referred to for the following discussion. 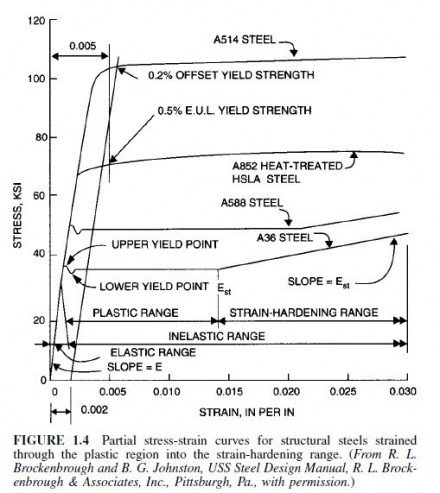 Strain Ranges. When a steel specimen is subjected to load, an initial elastic range is observed in which there is no permanent deformation. Thus, if the load is removed, the specimen returns to its original dimensions. The ratio of stress to strain within the elastic range is the modulus of elasticity, or Young’s modulus E. Since this modulus is consistently about 29  103 ksi for all the structural steels, its value is not usually determined in tension tests, except in special instances.
The strains beyond the elastic range in the tension test are termed the inelastic range.
For as-rolled and high-strength low-alloy (HSLA) steels, this range has two parts. First observed is a plastic range, in which strain increases with no appreciable increase in stress.
This is followed by a strain-hardening range, in which strain increase is accompanied by a significant increase in stress. The curves for heat-treated steels, however, do not generally exhibit a distinct plastic range or a large amount of strain hardening.
The strain at which strain hardening begins (st) and the rate at which stress increases with strain in the strain-hardening range (the strain-hardening modulus Est) have been determined for carbon and HSLA steels. The average value of Est is 600 ksi, and the length of the yield plateau is 5 to 15 times the yield strain. (T. V. Galambos, ‘‘Properties of Steel for Use in LRFD,’’ Journal of the Structural Division, American Society of Civil Engineers, Vol. 104, No. ST9, 1978.)
Yield Point, Yield Strength, and Tensile Strength. As illustrated in Fig. 1.4, carbon and HSLA steels usually show an upper and lower yield point. The upper yield point is the value usually recorded in tension tests and thus is simply termed the yield point.
The heat-treated steels in Fig. 1.4, however, do not show a definite yield point in a tension test. For these steels it is necessary to define a yield strength, the stress corresponding to a specified deviation from perfectly elastic behavior. As illustrated in the figure, yield strength is usually specified in either of two ways: For steels with a specified value not exceeding 80 ksi, yield strength is considered as the stress at which the test specimen reaches a 0.5% extension under load (0.5% EUL) and may still be referred to as the yield point. For higherstrength steels, the yield strength is the stress at which the specimen reaches a strain 0.2% greater than that for perfectly elastic behavior.
Since the amount of inelastic strain that occurs before the yield strength is reached is quite small, yield strength has essentially the same significance in design as yield point.
These two terms are sometimes referred to collectively as yield stress.
The maximum stress reached in a tension test is the tensile strength of the steel. After this stress is reached, increasing strains are accompanied by decreasing stresses. Fracture eventually occurs.
Proportional Limit. The proportional limit is the stress corresponding to the first visible departure from linear-elastic behavior. This value is determined graphically from the stressstrain curve. Since the departure from elastic action is gradual, the proportional limit depends greatly on individual judgment and on the accuracy and sensitivity of the strain-measuring devices used. The proportional limit has little practical significance and is not usually recorded in a tension test.
Ductility. This is an important property of structural steels. It allows redistribution of stresses in continuous members and at points of high local stresses, such as those at holes or other discontinuities.
In a tension test, ductility is measured by percent elongation over a given gage length or percent reduction of cross-sectional area. The percent elongation is determined by fitting the specimen together after fracture, noting the change in gage length and dividing the increase by the original gage length. Similarly, the percent reduction of area is determined from crosssectional measurements made on the specimen before and after testing.
Both types of ductility measurements are an index of the ability of a material to deform in the inelastic range. There is, however, no generally accepted criterion of minimum ductility for various structures.
Poisson’s Ratio. The ratio of transverse to longitudinal strain under load is known as Poisson’s ratio . This ratio is about the same for all structural steels—0.30 in the elastic range and 0.50 in the plastic range.
True-Stress–True-Strain Curves. In the stress-strain curves shown previously, stress values were based on original cross-sectional area, and the strains were based on the original gauge length. Such curves are sometimes referred to as engineering-type stress-strain curves.
However, since the original dimensions change significantly after the initiation of yielding, curves based on instantaneous values of area and gage length are often thought to be of more fundamental significance. Such curves are known as true-stress–true-strain curves.
A typical curve of this type is shown in Fig. 1.5.
The curve shows that when the decreased area is considered, the true stress actually increases with increase in strain until fracture occurs instead of decreasing after the tensile strength is reached, as in the engineering stress-strain curve. Also, the value of true strain at fracture is much greater than the engineering strain at fracture (though until yielding begins true strain is less than engineering strain).