At every joint in a truss, working lines of the intersecting members preferably should meet at a point to avoid eccentric loading (Art. 13.2). While the members may be welded directly to each other, most frequently they are connected to each other by bolting to gusset plates.
Angle members may be bolted to a single gusset plate, whereas box and H shapes may be bolted to a pair of gusset plates.
A gusset plate usually is a one-piece element. When necessary, it may be spliced with groove welds. When the free edges of the plate will be subjected to compression, they usually are stiffened with plates or angles. Consideration should be given in design to the possibility of the stresses in gusset plates during erection being opposite in sense to the stresses that will be imposed by service loads.
Gusset plates are sometimes designed by the method of sections based on conventional strength of materials theory. The method of sections involves investigation of stresses on various planes through a plate and truss members. Analysis of gusset plates by finite-element methods, however, may be advisable where unusual geometry exists.
Transfer of member forces into and out of a gusset plate invokes the potential for block  shear around the connector groups and is assumed to have about a 30 angle of distribution with respect to the gage line, as illustrated in Fig. 13.10 (line 1-5 and 4-6).
The following summarizes a procedure for load-factor design of a truss joint. Splices are assumed to occur within the truss joints. (See examples in Arts. 13.13 and 13.14.) The concept employed in the procedure can also be applied to working-stress design.
1. Lay out the centerlines of truss members to an appropriate scale and the members to a scale of 1⁄2 in = 1 ft, with gage lines.
2. Detail the fixed parts, such as floorbeam, strut, and lateral connections.
3. Determine the grade and size of bolts to be used.
4. Detail the end connections of truss diagonals. The connections should be designed for the average of the design strength of the diagonals and the factored load they carry but not less than 75% of the design strength. The design strength should be taken as the smallest of the following: (a) member strength, (b) column capacity, and (c) strength based on the width-thickness ratio b/ t. A diagonal should have at least the major portion of its ends normal to the working line (square) so that milling across the ends will permit placing of templates for bolt-hole alignment accurately. The corners of the diagonal should be as close as possible to the cover plates of the chord and verticals. Bolts for connection to a gusset plate should be centered about the neutral axis of the member. or the web plate of an H member to the flange plates, to transfer the connection load from the flange plate into the web plates over the length of the gusset connection. Weld lengths should be designed to satisfy fatigue requirements. The weld size should be shown on the plans if the size required for loads or fatigue is larger than the minimum size allowed. 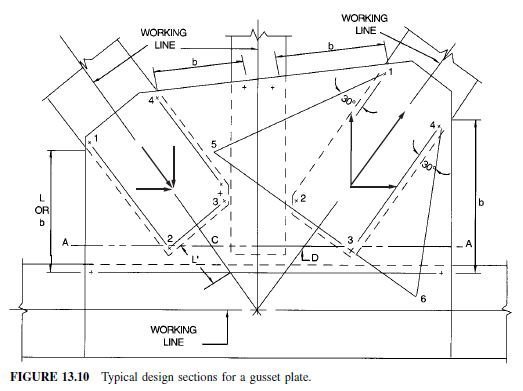 6. Avoid the need for fills between gusset plates and welded-box truss members by keeping the out-to-out dimension of web plates and the in-to-in dimension of gusset plates constant.
7. Determine gusset-plate outlines. This step is influenced principally by the diagonal connections.
8. Select a gusset-plate thickness t to satisfy the following criteria, as illustrated in Fig.
13.10:
a. The loads for which a diagonal is connected may be resolved into components parallel to and normal to line A-A in Fig. 13.10 (horizontal and vertical). A shearing stress is induced along the gross section of line A-A through the last line of bolts. Equal to the sum of the horizontal components of the diagonals (if they act in the same 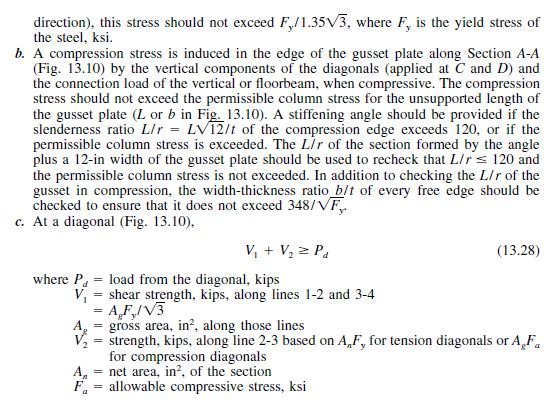 The distance L in Fig. 13.10 is used to compute Fa for sections 2-3 and 5-6.
d. Assume that the connection stress transmitted to the gusset plate by a diagonal spreads over the plate within lines that diverge outward at 30 to the axis of the member from the first bolt in each exterior row of bolts, as indicated by path 1-5-6- 4 (on the right in Fig. 13.10). Then, the stress on the section normal to the axis of the diagonal at the last row of bolts (along line 5-6) and included between these diverging lines should not exceed Fy on the net-section for tension diagonals and Fa for compression diagonals.
9. Design the chord splice (at the joint) for the full capacity of the chords. Arrange the gusset plates and additional splice material to balance, as much as practical, the segment being spliced.
10. When the chord splice is to be made with a web splice plate on the inside of a box member (Fig. 13.11), provide extra bolts between the chords and the gusset on each side of the inner splice plate when the joint lies along the centerline of the floorbeam.
This should be done because in the diaphragm bolts at floorbeam connections deliver some floorbeam reaction across the chords. When a splice plate is installed on the outer side of the gusset, back of the floorbeam connection angles (Fig. 13.11), the entire group of floorbeam bolts will be stressed, both vertically and horizontally, and should not be counted as splice bolts.
11. Determine the size of standard perforations and the distances from the ends of the member.