where 1, 2, 3  angle force makes with the x axis. If the particle is displaced a virtual amount s along the x axis from A to A (Fig. 3.58b), then the total virtual work done by the forces is the sum of the virtual work generated by displacing each of the forces F1, F2, and F3. According to Eq. (3.91),

If the lever is in equilibrium, SW = 0. Hence W1a = W2b, which is the equilibrium condition that the sum of the moments of all forces about a support should be zero.
When the body is not rigid but can be distorted, the principle of virtual work as developed above cannot be applied directly. However, the principle can be modified to apply to bodies that undergo linear and nonlinear elastic deformations.

Strain Energy in a Bar. The internal work U done on elastic members is called elastic potential energy, or strain energy. Suppose, for example, that a bar (Fig. 3.60a) made of an elastic material, such as steel, is gradually elongated an amount Af by a force APf . As the 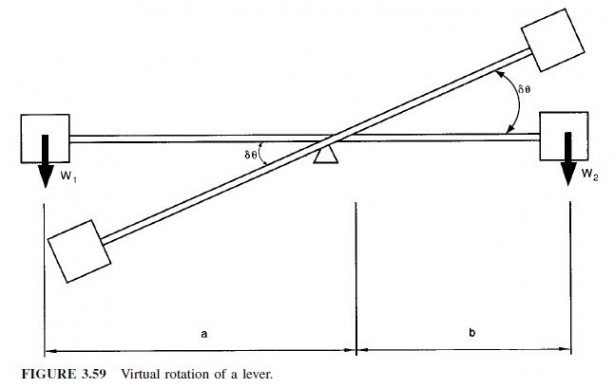 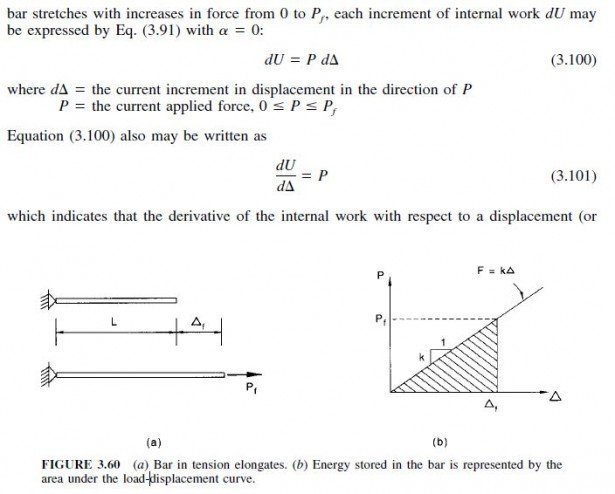 rotation) gives the corresponding force (or moment) at that location in the direction of the displacement (or rotation).
After the system comes to rest, a condition of equilibrium, the total internal work is

Principle of Virtual Work. This example illustrates the principal of virtual work. If an elastic body in equilibrium under the action of external loads is given a virtual deformation from its equilibrium condition, the work done by the external loads during this deformation equals the change in the internal work or strain energy, that is, 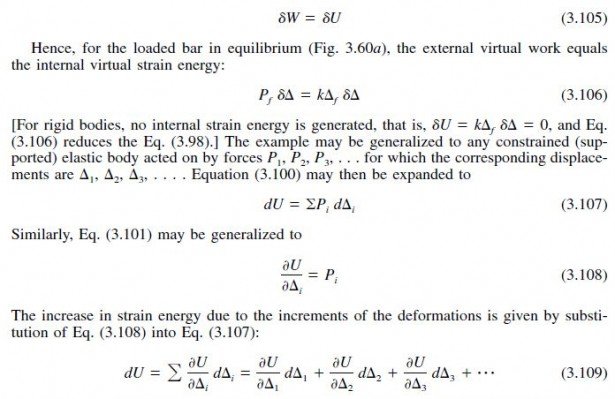 If specific deformations in Eq. (3.109) are represented by virtual displacements, load and deformation relationships for several structural systems may be obtained from the principle of virtual work. 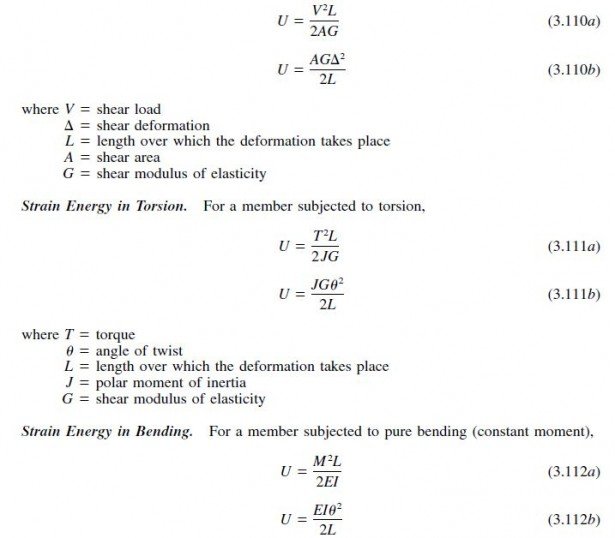 where M  bending moment
  angle through which one end of beam rotates with respect to the other end
L  length over which the deformation takes place
I  moment of inertia
E  modulus of elasticity
For beams carrying transverse loads, the total strain energy is the sum of the energy for bending and that for shear.

Virtual Forces. Virtual work also may be created when a system of virtual forces is applied to a structure that is in equilibrium. In this case, the principle of virtual work requires that external virtual work, created by virtual forces acting over their induced displacements, equals the internal virtual work or strain energy. This concept is often used to determinedeflections. For convenience, virtual forces are often represented by unit loads. Hence this method is frequently called the unit-load method.
Unit-Load Method. A unit load is applied at the location and in the direction of an unknown displacement  produced by given loads on a structure. According to the principle of virtual work, the external work done by the unit load equals the change in strain energy in the structure: