Alidade bubble The bubble (usually a split bubble) used to set the vertical circle, usually
so that the zero degree marker is pointing directly upwards.
Backlash The looseness or ‘play’ in a piece of mechanism which means that not all parts
of the mechanism are always in the same place when one part of it is moved to a
particular position. This can, for instance, affect the angle read from a theodolite for a
given sighting, depending upon whether the final adjustments to the telescope and
vernier were made in a clockwise or anticlockwise direction.
Backsight The sighting from a level to a stave positioned on a point whose height is
known. The level’s line of collimation can then be calculated. See Foresight.
Bay A sequence of levelling backsights and foresights which either closes on itself, or
which runs from one point of known height to another. The ‘closure’ of the bay is an
indication of the accuracy of the readings within it.
Bubble error The mis-setting of a spirit bubble such that a piece of equipment is not
exactly horizontal (or vertical) when the bubble indicates that it is.
Change point The point occupied by a levelling staff when the instrument is moved to
level the next part of the bay.
Circle One of the protractors in a theodolite, on which horizontal or vertical angles are
measured.
Clinometer A simple optical device incorporating a pendulum (or spirit level) and a
protractor, for estimating slope angles.
Closure A check on the consistency of a set of observations, e.g.:
1 Re-observing a reference object after taking a set of horizontal angles. A reading which
differs from the original reading by more than the accuracy of the instrument and
makes the other readings suspect.
2 Seeing whether the height of an object given by a set of levelling measurements
corresponds with its known height.
Collimation,line of The line of sight between the centre of the cross hairs in the eyepiece
of a telescope and the distant object they appear to intersect, once parallax has been
removed. In levelling, the height of that (horizontal) line.
Cup bubble A circular ‘spirit level’ bubble, used for setting a tribrach or level
approximately horizontal.
Detail pole An extendable pole about 1 m in length, equipped with a reflector, used for
collecting detail for mapping. Colloquially known as a ‘pogo’.
Differential GPS The simultaneous reception of satellite signals by two receivers, one of
which is in a known position. The position of the other receiver can then be calculated
to high accuracy.
EDM (electromagnetic distance measurement) Measurement of distance by counting the
number of cycles between a transmitter/receiver and a reflector, of an electromagnetic
wave whose wavelength is known.

EGNOS The European Geostationary Navigation Overlay System, which enhances the
GPS system over Europe.
Epoch An instant in time, e.g. 00:00 hours on 1 January 1989.
Face An alternative name for the vertical circle.
Foresight The sighting from a level (whose line of collimation is known) to a stave
positioned on a point whose height is required. See Backsight.
Geodesic The shortest path over the surface of an ellipsoid between two points on that
surface.
Geographical The co-ordinate system which defines the position of a point by quoting
its latitude, longitude and distance above the surface of an ellipsoid.
Geoid The irregularly shaped surface defined by the locus of all points around the earth
with the same gravitational potential as some datum—in the British Isles, the datum is
a marker near the mean sea level at Newlyn, in Cornwall.
GPS (global positioning system) The network of satellites managed by the USA, which
enables the position of a station to be determined by measuring its distance from four
or more of them.
Horizontal circle See Circle.
Level A telescope designed to have a horizontal line of collimation, used for comparing
the heights of two stations.
Navigational GPS The use of GPS data to calculate the position of a single receiver,
without reference to any other receivers.
Orthogonal A co-ordinate system in which the three axes are at right angles to one
another.
Orthometric height A height measured from the local geoid.
Parallax The spatial separation between, for instance, the image of a distant object and
the cross hairs in an instrument, which causes the two to appear to move relative to
each other depending on the position of the observer’s eye relative to the eyepiece.
Photogrammetry A technique for determining the relative 3D positions of points by
taking photographs of the points from two different places. Two overlapping
photographs taken from an aeroplane or satellite can be used to create topographic
maps by this technique.
Plate An alternative term for the horizontal circle.
Plate bubble A levelling bubble, usually tubular, built into a theodolite to set the plate, or
horizontal circle, level.
Ranging rod A striped pole, pointed at one end, used for checking lines of sight. The
stripes are usually a decimetre wide, enabling the rod to be used as a crude ‘ruler’.
Real time kinematic A method of differential GPS survey in which the two receivers are
in radio contact with each other and can thus calculate the exact difference in their
positions in real time.
Reciprocal vertical A method of observing vertical angles simultaneously from both
ends of a ray, to cancel out atmospheric effects.
Redundancy The principle of taking more measurements than are strictly required to fix
the positions of unknown points, so that any errors in the measurement data become
apparent. This is analogous to a ‘redundant’ structure, which has more bracing than
necessary to prevent it falling down.

Reference object A station observed at the start and end of a set of horizontal angle
observations, whose reading on the horizontal circle is used as a datum for the other
readings. The co-ordinates of the reference object need not necessarily be known at
the time of observation—it is more important that the observation should be one which
it is easy to take consistently.
Resectioning Establishing the position of a station by mounting an instrument over it,
and measuring angles and distances to other known stations.
Round A complete set of horizontal angles, measured circle left and circle right, of one
or more stations, with respect to a reference object.
RTK See Real time kinematic.
RV See Reciprocal vertical.
Scale factor The factor by which the actual scale of a map at a given locality differs from
its nominal scale. A local scale factor of, say, 1.25 on a 1:50,000 map would give a
local scale of 1:40,000.
Split bubble A bubble with an optical arrangement which shows its opposite ends side
by side. The bubble is levelled by lining up the images of the two ends. This is more
precise and repeatable than using engraved marks on the glass, but it does not
eliminate bubble error.
Stadia lines Two (usually horizontal) lines parallel to the main cross hairs in a telescope,
subtending a fixed angle of observation and used in tachymetry.
Staff A graduated rod, used for levelling and tachymetry—also called a stave.
Station A fixed point on the ground, whose position is known or required.
Stave See Staff.
Swing The term for rotating a theodolite about its vertical axis. ‘Swing left’ means rotate
anticlockwise, as seen from above.
Tachymetry The measurement of distance by observing the length of a distant stave
which subtends a known angle at the instrument, usually by using stadia hairs in the
telescope.
Tangent screw An adjustment screw tangential to the horizontal or vertical axis of an
instrument, which enables precise aiming of the telescope.
Target A visual reference mounted over a station, designed for precise and repeatable
observations of angles to that station.
Temporary bench mark A point established at (usually) the extreme end of a levelling
bay, which will be used as the starting point for another bay.
Theodolite A telescope equipped with protractors in the horizontal and vertical planes,
capable of precise measurement of azimuth and elevation angles.
Total station An integrated theodolite and EDM device, often having the capability to
record readings electronically.
Transit The act of turning the telescope on a theodolite through the vertical, e.g. when
changing from circle left to circle right.
Traverse The establishment of successive station co-ordinates by finding bearings and
distances from a previous station. A traverse is usually ‘closed’ by using a known
station as the final one.
Tribrach An adjustable platform which fixes to a tripod and provides a location for an
instrument or target which is level and directly above a station. Tribrachs have footscrews
for levelling and may incorporate a plate bubble and an optical plummet.

TRF (terrestrial reference frame) A set of fixed points on the earth’s surface, with
published co-ordinates, which effectively define the position of a TRS with respect to
the earth. Inevitably, there will be small inconsistencies in a TRF due to the
impossibility of measuring the relative positions of the points exactly, plus the fact
that the points may move relative to one another after the measurements have been
made.
TRS (terrestrial reference system) A set of Cartesian axes, with an associated ellipsoid of
defined size and shape, whose position with respect to the earth is defined in some
way—often as the ‘best fit’ to a TRF.
Trunnion axis The horizontal axis in a theodolite; the bearings which support the
telescope.
Vernier A mechanism for reading a scale to greater precision. An optical vernier bends a
light path until two markers line up, then (effectively) reports the amount by which the
path was bent.
Vertical circle See Circle.
Zenith angle The angle between a line of sight and the vertical at the point of
observation. 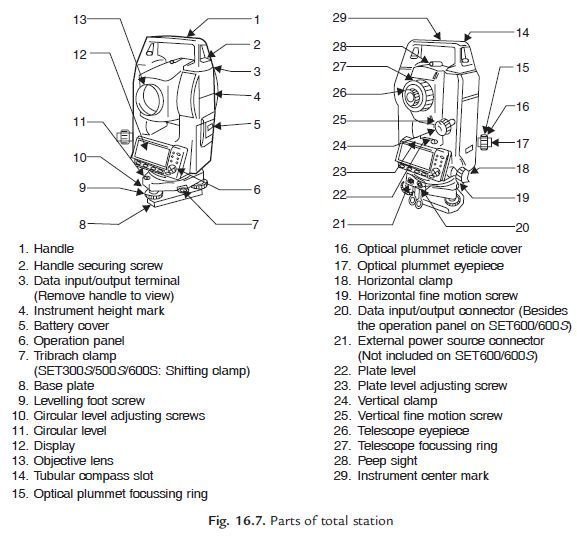