It is not possible and also not desirable to make maps to one to one scale. While making maps all distances are reduced by a fixed proportion. That fixed proportion is called scale of the map. Thus, if 1 mm on the paper represents 1 metre on the ground, then the scale of the map is 1 mm = 1 m or 1 mm = 1000 mm or 1 : 1000. To make scale independent of the units it is preferable to use representative factor which may be defined as the ratio of one unit on paper to the number of units it represent on the ground.
Thus 1 mm = 1 m is equivalent to

Apart from writing scale on map, it is desirable to show it graphically on it. The reason is, over the time, the paper may shrink and the scaling down the distances from map may mislead. The graphical scale should be sufficiently long (180 mm to 270 mm) and the main scale divisions should represent one, ten or hundred units so that it can be easily read.
The scale of a map is considered as

(ii) intermediate if it is between

In general, scale selected should be as large as possible, since it is not possible for human eye to distinguish between two point if distance between them is less than 0.25 mm. The recommended scales for various types of surveys are as shown in Table 11.1. 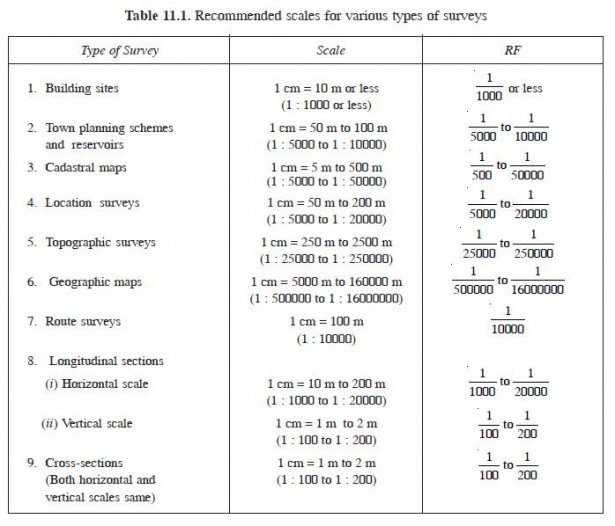