(a) Soundness Test: It is conducted by sieve analysis. 100 gms of cement is taken and sieved through IS sieve No. 9 for fifteen minutes. Residue on the sieve is weighed. This should not exceed 10 per cent by weight of sample taken. 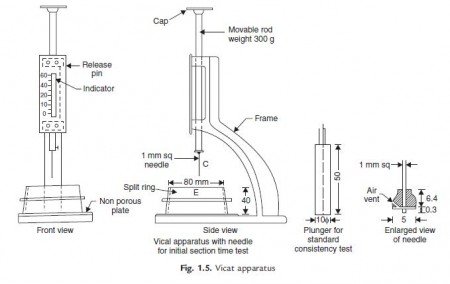 Before finding initial and final setting time it is necessary to determine water to be added to get standard consistency. For this 300 gms of cement is mixed with about 30% water and cement paste prepared is filled in the mould which rests on non porous plate. The plunger is attached to the movable rod of vicat apparatus and gently lowered to touch the paste in the mould. Then the plunger is allowed to move freely. If the penetration is 5 mm to 7 mm from the bottom of the mould, then cement is having standard consistency. If not, experiment is repeated with different proportion of water fill water required for standard consistency is found. Then the tests for initial and final setting times can be carried out as
explained below:

Initial Setting Time: 300 gms of cement is thoroughly mixed with 0.85 times the water for standard consistency and vicat mould is completely filled and top surface is levelled. 1 mm square needle is fixed to the rod and gently placed over the paste. Then it is freely allowed to penetrate. In the beginning the needle penetrates the paste completely. As time lapses the paste start losing its plasticity and offers resistance to penetration. When needle can penetrate up to 5 to 7 mm above bottom of the paste experiment is stopped and time lapsed between the addition of water and end if the experiment is noted as initial setting time.

Final Setting Time: The square needle is replaced with annular collar. Experiment is continued by allowing this needle to freely move after gently touching the surface of the paste. Time lapsed
between the addition of water and the mark of needle but not of annular ring is found on the paste. This time is noted as final setting time.

(c) Soundness Test: This test is conducted to find free lime in cement, which is not desirable. Le Chatelier apparatus shown in Fig. 1.6 is used for conducting this test. It consists of a split brass mould of diameter 30 mm and height 30 mm. On either side of the split, there are two indicators, with pointed ends. The ends of indicators are 165 mm from the centre of the mould. 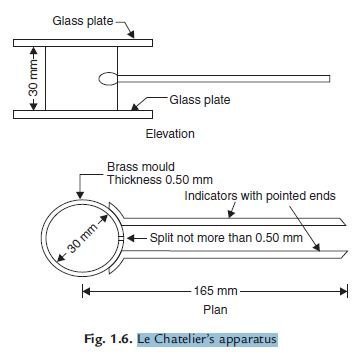 Properly oiled Le Chatelier mould is placed on a glass plate and is filled completely with a cement paste having 0.78 times the water required for standard consistency. It is then covered with another glass plate and a small weight is placed over it. Then the whole assembly is kept under water for 24 hours. The temperature of water should be between 24°C and 50°C. Note the distance between the indicator. Then place the mould again in the water and heat the assembly such that water reaches the
boiling point in 30 minutes. Boil the water for one hour. The mould is removed from water and allowed to cool. The distance between the two pointers is measured. The difference between the two readings indicate the expansion of the cement due to the presence of unburnt lime. This value should not exceed 10 mm.

(d) Crushing Strength Test: For this 200 gm of cement is mixed with 600 gm of standard sand confirming to IS 650–1966. After mixing thoroughly in dry condition for a minute distilled potable water (P/4)+ 3 percentage is added where P is the water required for the standard consistency. They are mixed with trowel for 3 to 4 minutes to get uniform mixture. The mix is placed in a cube mould of 70.6 mm size (Area 5000 mm2) kept on a steel plate and prodded with 25 mm standard steel rod 20 times within 8 seconds. Then the mould is placed on a standard vibrating table that vibrates at a speed of 12000 ± 400 vibration per minute. A hopper is secured at the top and the remaining mortar is filled. The mould is vibrated for two minutes and hopper removed. The top is finished with a knife or with a trowel and levelled. After 24 ± 1 hour mould is removed and cube is placed under clean water for curing.

After specified period cubes are tested in compression testing machine, keeping the specimen on its level edges. Average of three cubes is reported as crushing strength. The compressive strength at the end of 3 days should not be less than 11.5 N/mm2 and that at the end of 7 days not less than 17.5 N/mm2.